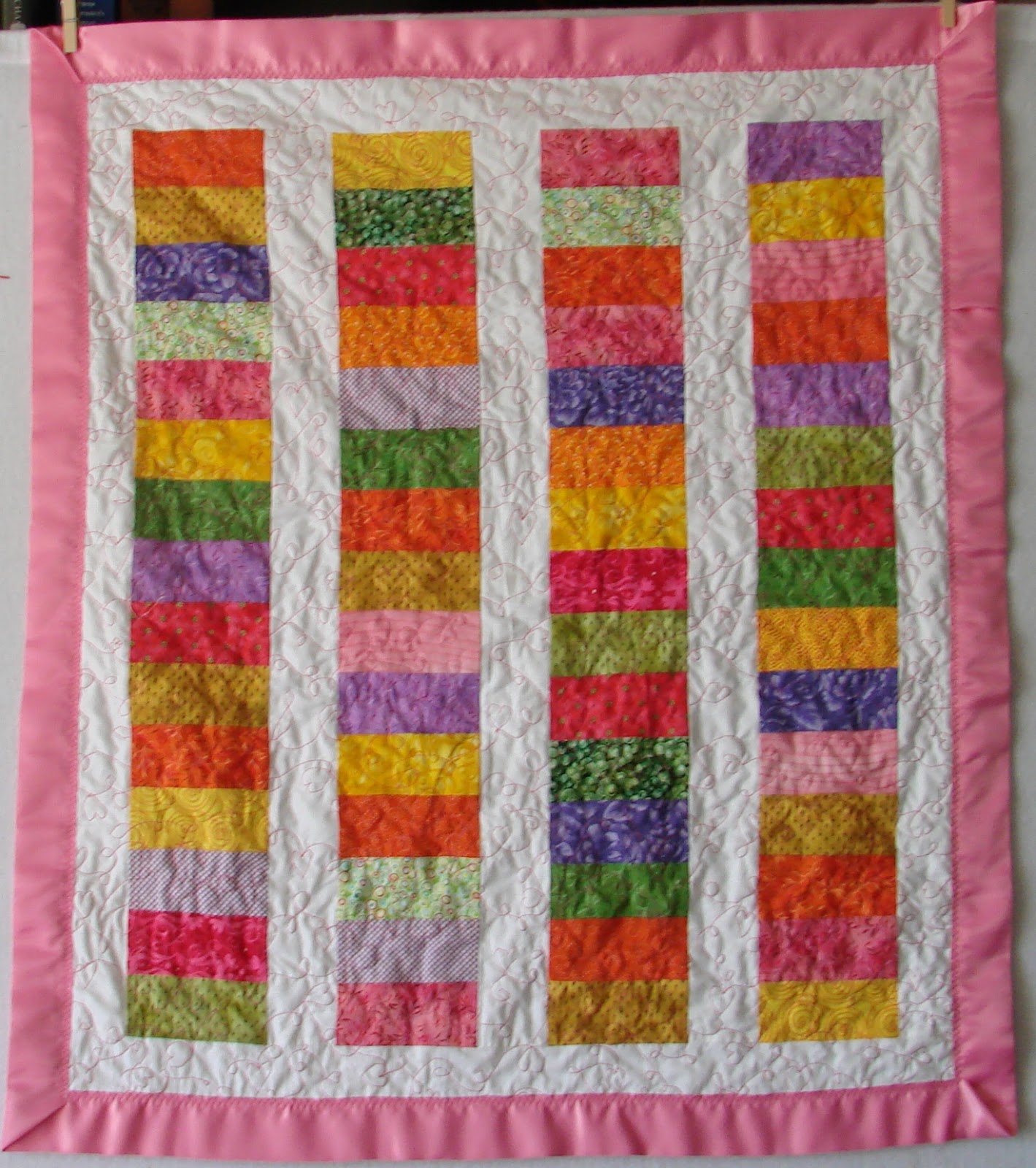 The "birth" (excuse the pun) of this quilt began as a leader/ender somewhere back in 2010 or 2011. My hubby’s father’s wife had given me a large amounts of fat quarters. Among them were these very brightly colored ones. I decided they would make wonderful stacked coins.

I cut each fat quarter into 5"x2.5" blocks. Then I sewed them together in strips. I put them away after this and planned to make them into charity quilts. When I decided to make them into a baby quilt for Sydney & Mike, I pulled them out and used them. There are still plenty left for more quilts.

TGS has a friend, Mike, that he's known for years while living in Maryland. He is a strong member of the Church of Jesus Christ of Latter-Day Saints and has never given up on TGS.

Around the time that TGS & OSLW were getting ready to marry, Good Friend’s wife, Mommy-To-Be was in the last trimester of her pregnancy. She was so close to her due date it was questionable if she would make it to the wedding, which was in Leesburg, Virginia.

Good friend & Mommy-To-Be made it to the wedding. Good friend was TGS’s best man. They attended part of the reception and then headed home.

The very, very next day they had their baby. The timing was very close on that birth! (Of course, TGS was born after a 45 minute labor and I just barely made it inside the hospital. But that’s another story!) 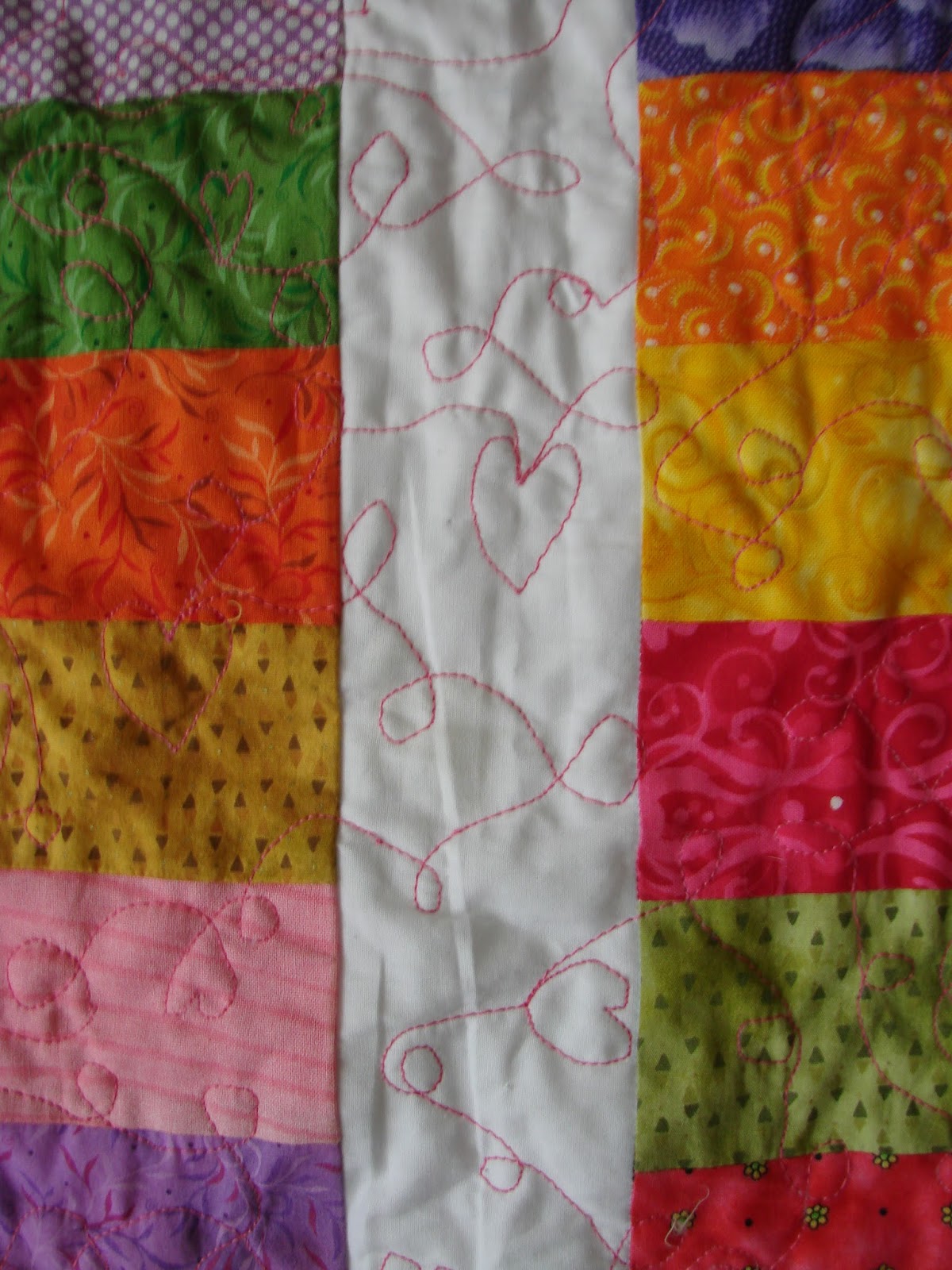 I wanted to make a quilt for their baby. Mommy-To-Be is the Relief Society’s President (women’s organization) in her branch. She has been a devoted friend to OSLW. She has helped OSLW in her new membership in the Church. I decided that
the Chinese coins would be a perfect, bright quilt.

I used some columns of the coins and still have enough for another larger quilt. I had some white minky that I thought would be perfect for the back. Even though quilters advise against it, I decided to machine quilt, rather than tie, the quilt.

After reading dozens of Googled articles on quilting and sewing with minky, I nearly changed my mind. Have you ever read them? It goes sort of like this: “Beware! Good-Intentioned Quilter, do not go! Do not pass Go. Go directly to tying the quilt!” (spooky music in the background)

You know the saying, Fools rush in where angels dare to tread! 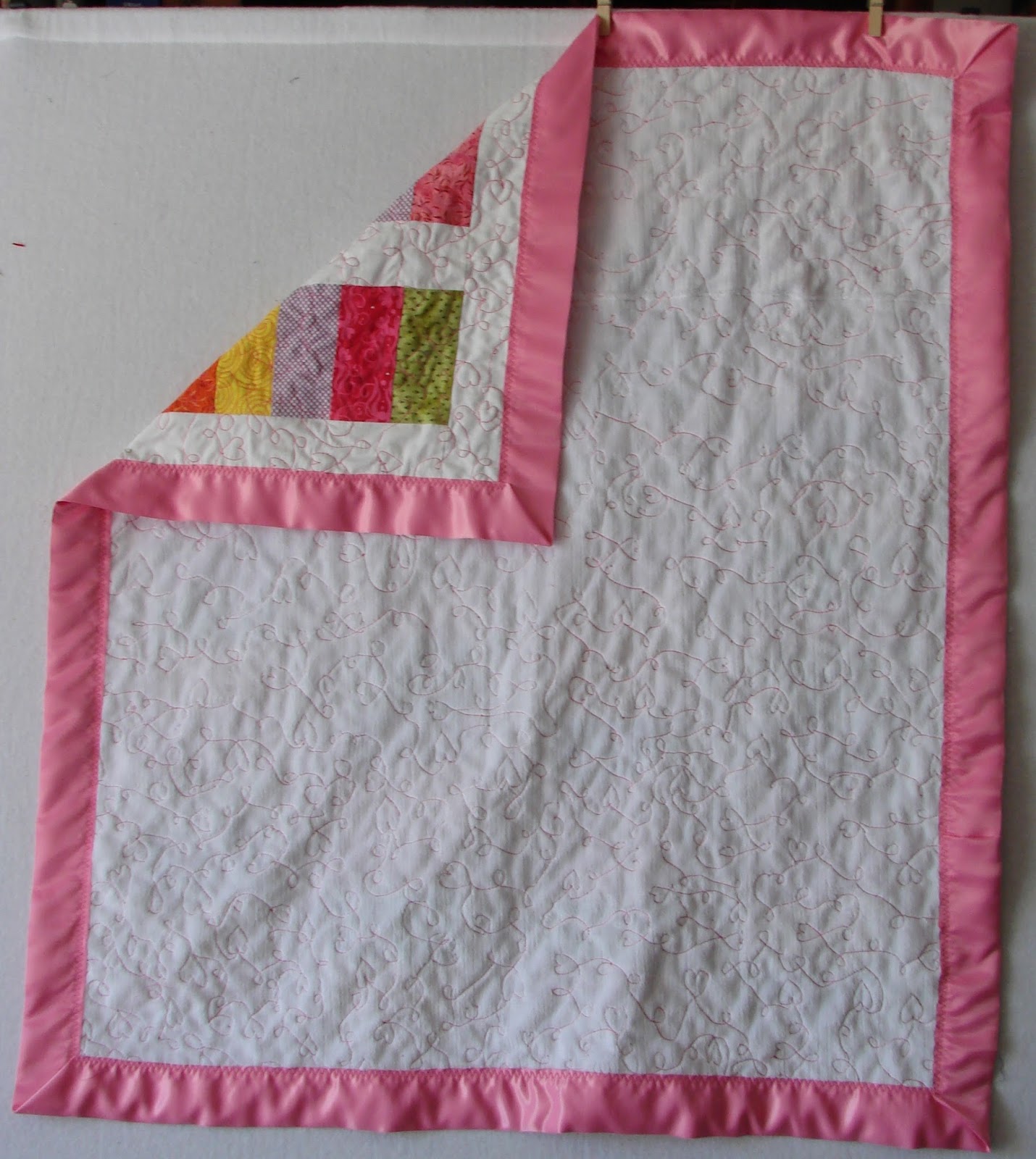 I decided to persevere and quilt. With tips from several (one or two, deeply-hidden articles), I quilted and… found it easy! Does that make me a fool? I think not! 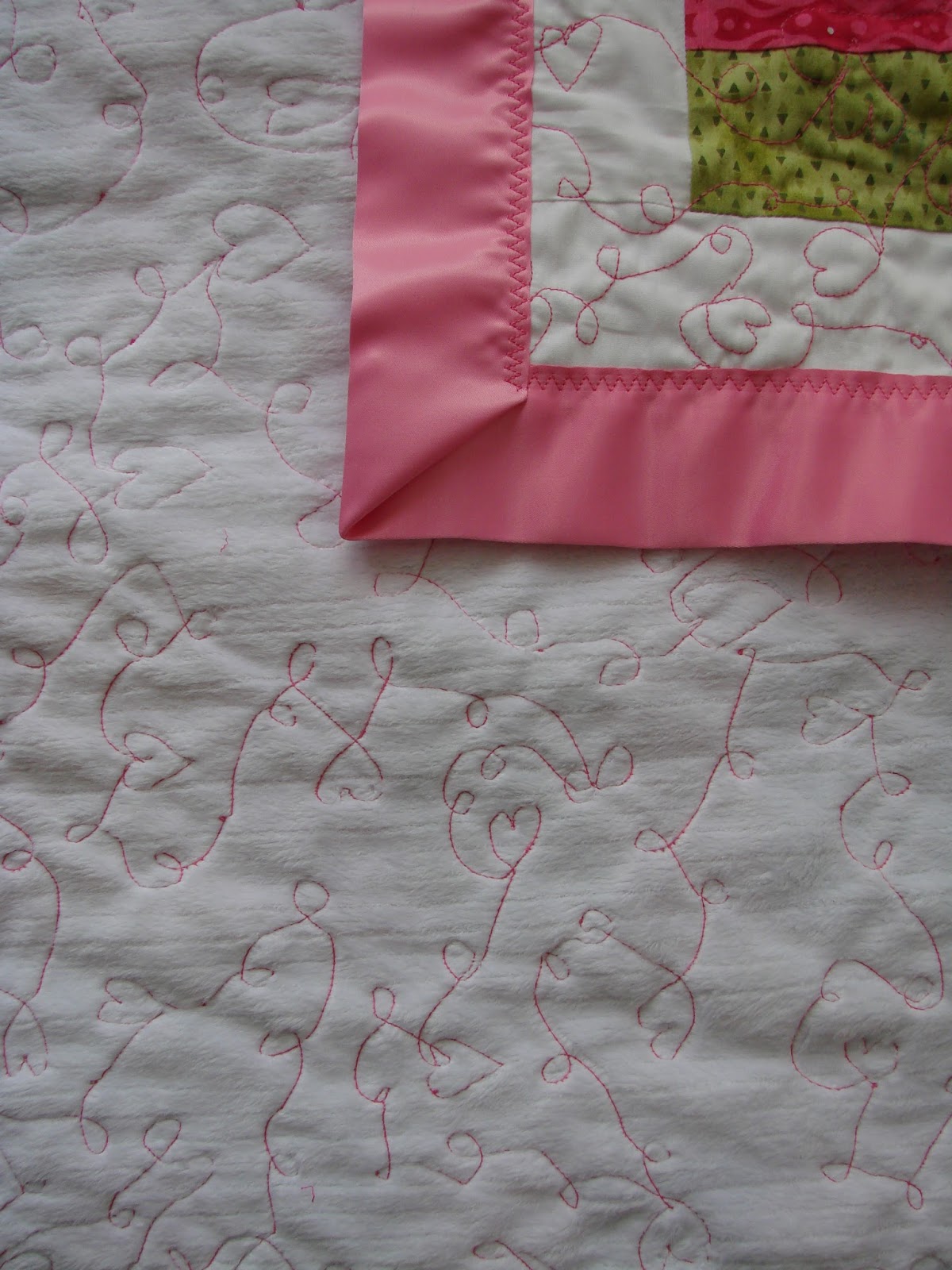 I remembered that Noel Heart had a woobie that was a baby blanket with satin binding. She loved, loved, loved that binding. She would rub her fingers back and forth on the satin and suck her two fingers.

I decided I would put satin binding on the blanket. I'd only had one experience with putting on satin binding to revive a friends baby quilt. Let’s just say that it wasn't a good experience and leave it at that.

Back to Googling. Again, after reading enough articles, I put the binding on and it came out perfectly!

I sent it off to Good Friend and Mommy-To-Be after school started, even though I had it finished a couple of months before.


Posted by Quilting Nonnie at 11:49 PM No comments:

Email ThisBlogThis!Share to TwitterShare to FacebookShare to Pinterest
Labels: quilting, Quilts from My Sewing Machine

In my hometown, Santa Rosa, there are many statues of the Peanuts characters. These are here, like I mentioned in my post last week, because Santa Rosa is the official hometown of Charles Schulz.

Charlie Brown was the first of the statues to be displayed in Santa Rosa. It was a event called, “It’s Your Hometown Charlie Brown.”

On the statue is a depiction of Downtown Santa Rosa. There are just generic names, but each one represents a real store there. For instance, in the front view, music is Stanroy's Music. In the back view, Deli is Max's Deli, which has been there for over 30 years.

If you look closely you'll see all the Peanuts characters lounging around the main street, both on front and back of Charlie. 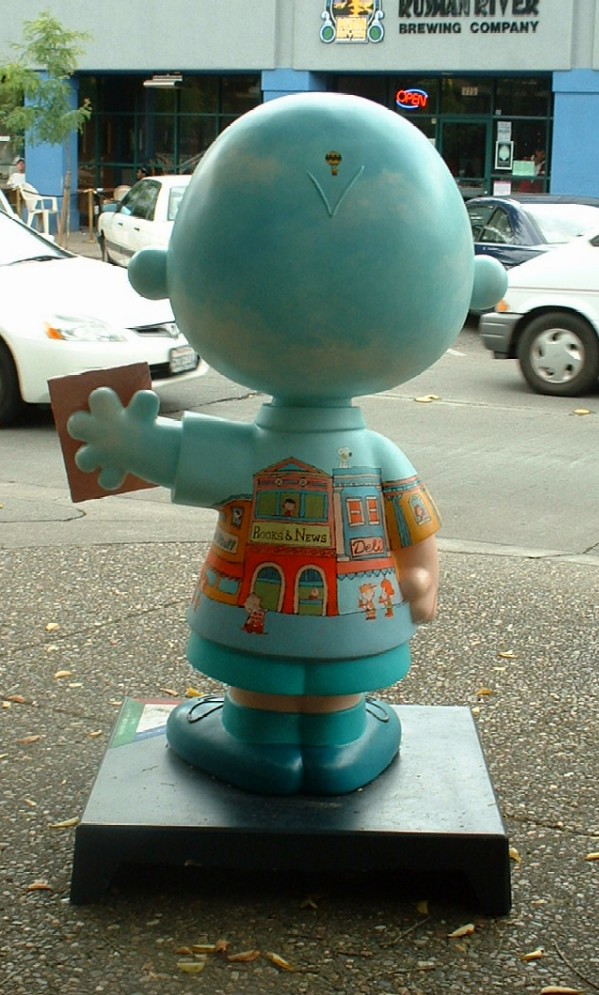 The statue was in the center of Railroad Square, the first downtown of Santa Rosa.

I hope he found her.

Last week I asked my blog readers to tell me what they're favorite Peanuts character is. The overwhelming response was Snoopy!

Flamingos Winging Their Way to Their New Home

Ta-da! The charity quilt for Quilty Hugs for Happy Chemo is on its way to find its new owner. 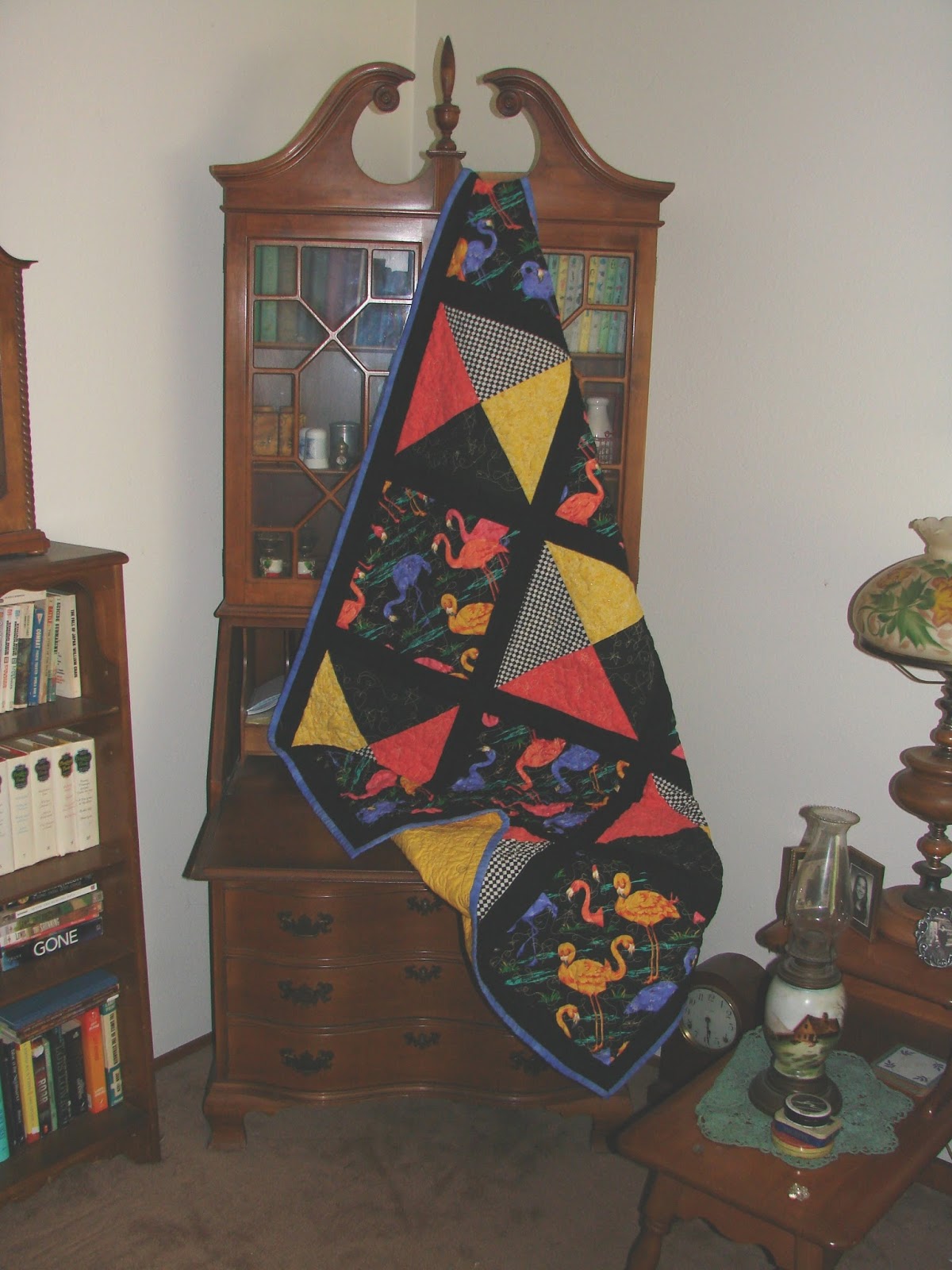 I am excited to donate this quilt and hope it will bring comfort to its owner. 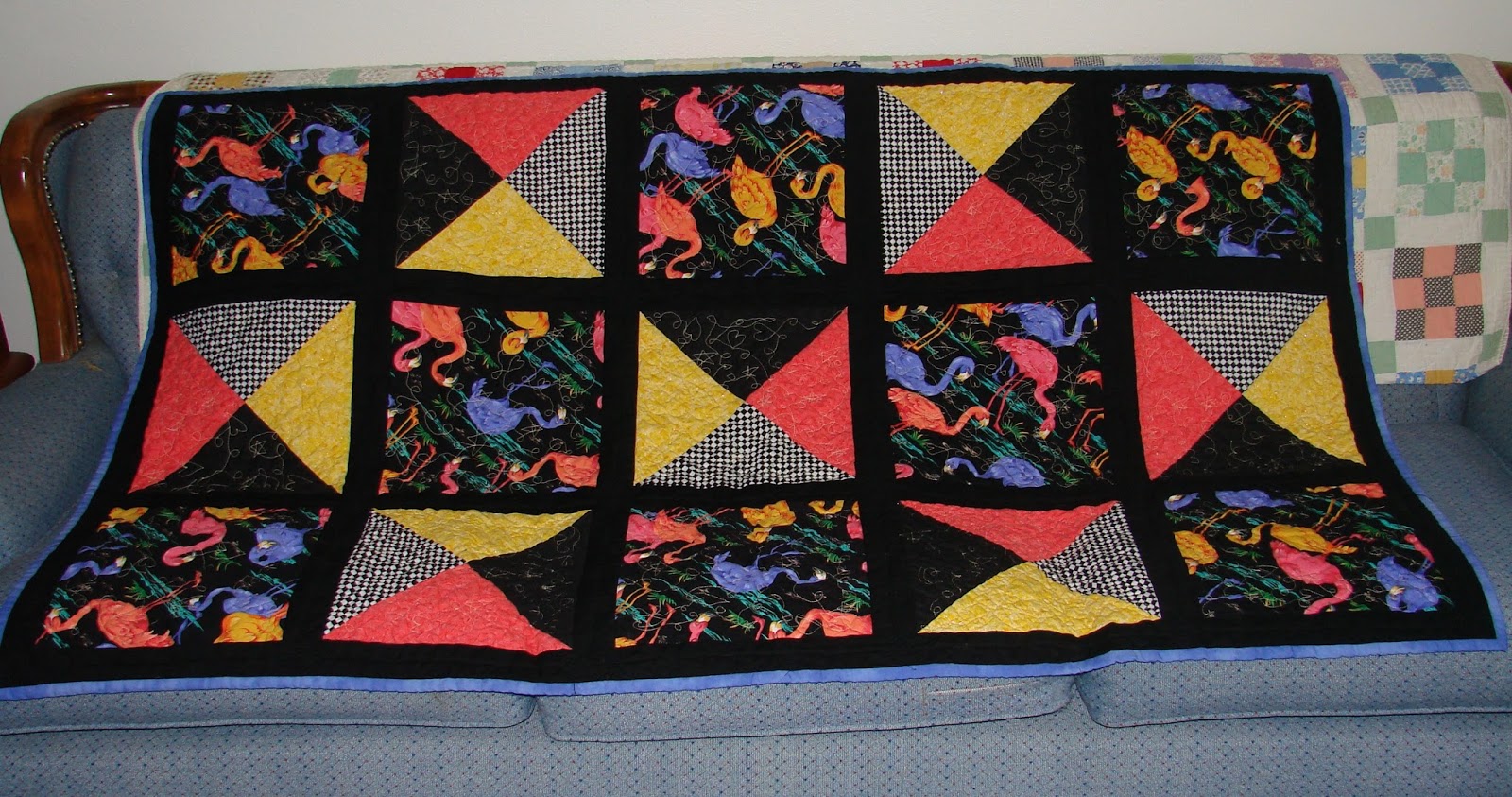 I spent all of last week quilting and trying to quilt the quilt. I’ll admit it, right here and now, that I’m not the best quilter in the world, USA, California, Santa Rosa, ummmm, on my block. Let’s face it…I’m a lowly beginner. 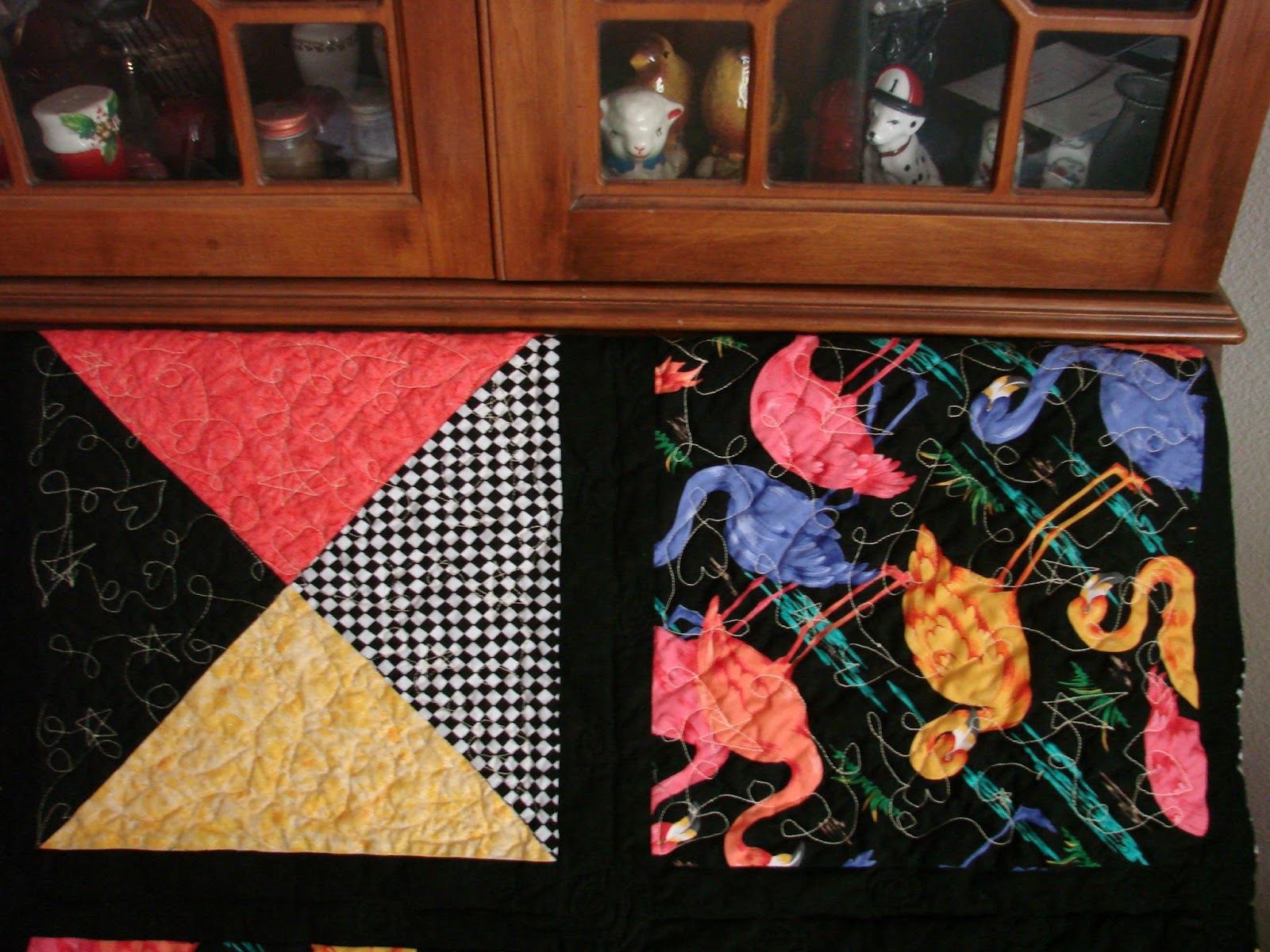 You might recall in the post where I unveiled the flamingos that I had a run-in with loops on the back of the quilt. I must admit that I behaved in an unseamly behavior as I handily dispensed with all the loops.

Fast forward to this past week…I had success in my meanders. Humbly I admit that some of the stars didn’t quite make all 5 points and some hearts looked deformed. I did the “Quilter’s Visual Test.” You know the one: if you can’t see any mistakes when riding by on a galloping horse…it’s good! Mine was good. And I didn’t even have to take off my glasses. 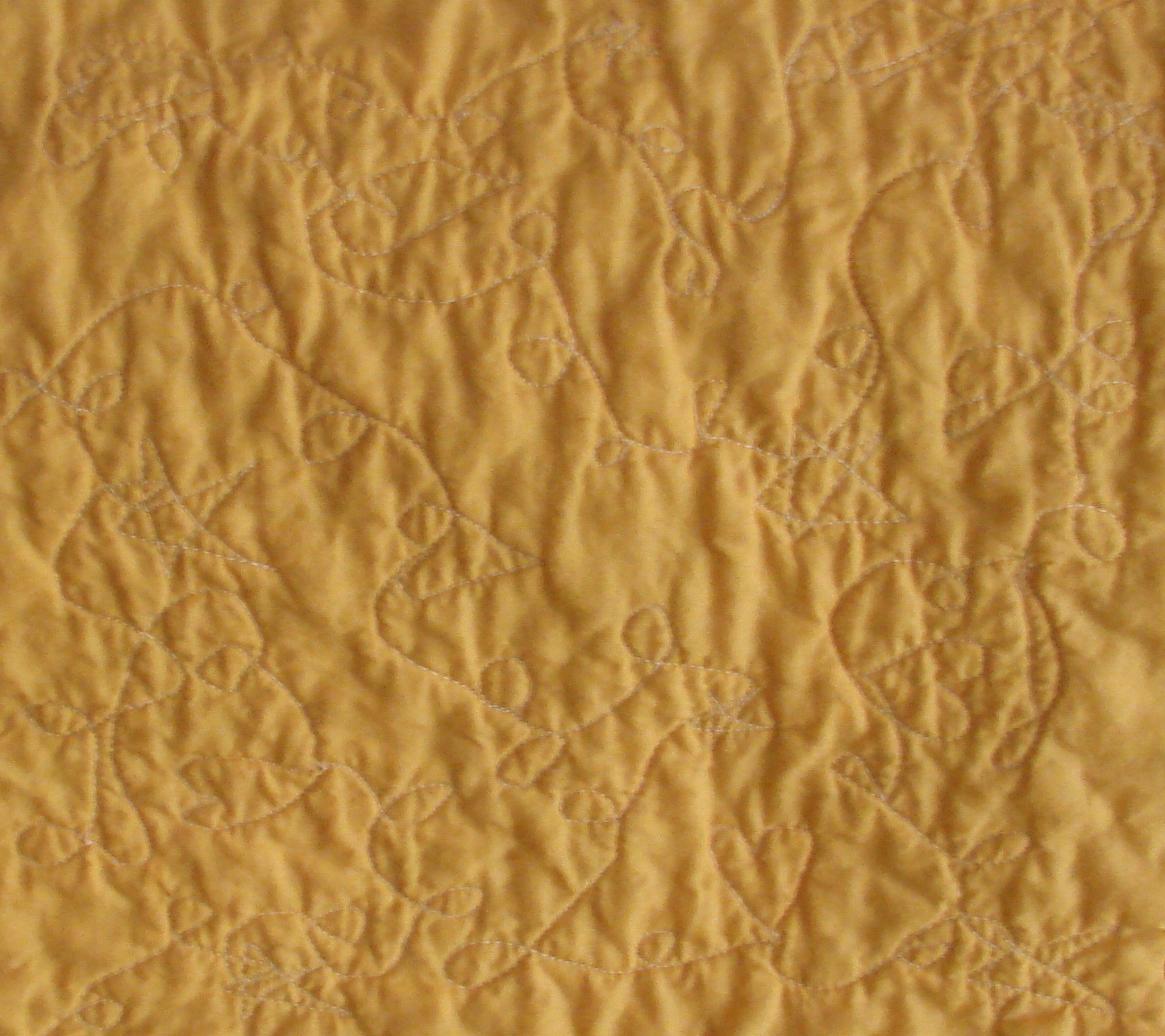 When it came time to do the borders, I looked for a good design. I consulted with my admired quilters: Leah Day and Lori Kennedy. I settled on a spiral pattern from Leah Day, which is listed in her “Super Beginner” group. I did lots and lots of practice before I gamely started on my quilt.

My borders are in black. The visibility of my meanders on the body of the quilt, I decided that quilting in black was the best gambit. It did mean, however, that the back side of the quilt would have black spirals against the cheddar. There wasn’t much of a choice…

At first when I looked, during quilting, at the black on cheddar, I wasn’t too impressed. But once done, I loved the affect of the squares that were made by the borders.

Again, wobbly and most spirals looked funny, but I found myself definitely enjoying the movement and rhythm of quilting them. There might be hope for me yet!

I discovered through the quilting of the borders, that my sewing machine has control issues. It’s sad but true. All had been going very well with my meander. I practiced the spirals on muslin sandwiches. Once I had the real quilt, it went a couple of vertical sashings then started looping in the back. I rethreaded the machine, practiced on sample sandwich and everything worked again. But then it started looping again. Sadly, this became a process. Each time after trying something new and getting a perfect back on the sample sandwich, all would go well and then it would eventually start looping again. I only had two horizontal rows to quilt, but just couldn’t get any cooperation from the machine.

I stopped for the evening before I threw the sewing machines out the window. Then follow it out there with a chain saw.

Or start with a hatchet and turn it into something useful.


The next day I started with a different machine and finally got the quilt done. Breathe a sigh of relief.

I had decided to use a lavender binding that matched some of the flamingos on the fabric. I knew it would look good on the front, but wondered about it with the back. Silly me, I shouldn’t have worried. I absitively, posilutely love it!

And it is completely finished. It’s worth it because I want to give it to someone who will love it.

I’m hooking up with the following blogs. Hop on by to check out lots of lovely quilts! Their badges are in the right sidebar.
So Scrappy RSC Saturday
Patchwork Times
Show & Tell Tuesday
Fabric Story
Linky Tuesday
WIP Wednesday
We Did It Wednesday
WiP on Wednesday
Needle and Thread Thursday
Fabric Frenzy
Free Motion Mavericks
I Quilt
Fabric Frenzy
TGIFF
Finish It Up Friday
Sew Darn Crafty Linky Party