I was totally worn out yesterday. I actually went to bed at 8:30. Hence, no post. I had a nice deep sleep, but still felt tired all day. I came home and took a nap. I was ready for bed at 8:00 tonight. Just want to tell my stories before I head to bed.

Here's another item from our early family's Advent Activity Calendar. It starts with a young me. Wow were our Christmases spectacular! I always got lots and lots of presents. Even then I remember feeling a huge sense of letdown when the last present was opened. It wasn't a greedy feeling, but I felt that there should be more. Time passes and I'm a young mom. Christmas is more commercialized than when I was a child and it rates a two on the over-doing it scale compared to present day with its over-the-top money, money, money, and buy, buy, buy and more, more, more attitude.

We didn't have much money back then. My husband was just out of college working his first big job. I was a stay-at-home mom. We did a lot of scrimping and doing without. When Christmas rolled around, I worried that my children would feel they weren't getting enough presents. Actually, they weren't. I wanted them to understand the joy of giving and the spirit of Christmas.

In the first year of my marriage, I had read the entire set of the Laura Ingalls Wilder books. I had never read them when I was younger and I adored these books. I loved the ways they made do and did without.

One particular story and phrase has stuck with me from these books,it is in Little House on the Prairie. Pa is getting ready to go to town. He has borrowed some nails from Mr. Edwards and needs to buy some to pay him back. It took four to five days to get to town and back and he hasn't been in about a year. Finally Pa decides he'd better "go and get it over with." He equivocates that he could stay back. Ma reminds him that they don't like borrowing and that he has also borrowed tobacco. Ma is almost out of cornmeal. Finally Pa says, "We could get along all right, if I didn't. There's no need to running to town all the time, for every little thing."

I remind myself of that when I start to think of buying something that I think I "need." How much can I get along without? What is necessary? Have you noticed that now in advertisements that "deserve" has replaced the word "need." Now you really "deserve" to buy a new car, or "deserve" the latest vacation. We are a long ways away from what our depression-era parents and grandparents learned and what the quote teaches: there really is very little we actually have to have to get along.

Now I'm rambling...back to the Advent Activity. In my effort to instill good values in my children, one night in the days before Christmas the slip would read, "Little House on the Prairie." In this same volume is a story titled, "Mr. Edwards Meets Santa Claus." On the prairie it is Christmas Eve. Laura and Mary are worried because there is no snow for Santa Claus to travel with his reindeer. The creek near their home is swollen and roaring. Mr. Edwards had been invited for Christmas dinner but now won't be able to make it because the creek is too high. It is a very disappointed Mary and Laura who go to bed and to sleep. Sometime during the night, Mr. Edwards makes it to their home. He has brought presents from Santa. Laura gets a tin cup of her very own; until then Mary and Laura have shared a cup. They have each gotten a long stick of candy and a very pretty heart-shaped cake with white sugar on top and made from pure white flour. In the very bottom of their stocking is a shiny penny. They marvel at their gifts and stare and stare. Laura writes: "They had never even though of such a thing as having a penny. Think of having a whole penny for your very own. Thing of having a cup and a cake and a stick of candy and a penny. There never had been such a Christmas."

My children loved this story and eagerly looked forward to it each year. Last year my middle daughter called from Massachusetts on Christmas Eve. She wanted to read the Little House on the Prairie Christmas story to her new seven-year-old step-daughter. I scanned the story and sent it across the United States that night so a tradition could be handed down to another generation.

Tonight's carol is from Brad Paisley. You'll hear in the introduction that he wrote it when he was 13 years old. It's called, "Born on Christmas Day."

An extra treat for you since I slept through yesterday's post!

God Bless.
Posted by Quilting Nonnie at 9:51 PM No comments:

The school kids are hyper all the time now. They're bouncing off the walls and can't wait for vacation. Whenever one of my students says to me, "I can't wait for Christmas!" I have to chuckle inwardly. You think the kids are anxious...the teachers are chomping at the bit!

School is like a massive sugar high these days! Lots of high spirits and squirrely-ness and exuberant behavior. If we can only survive eight more days! 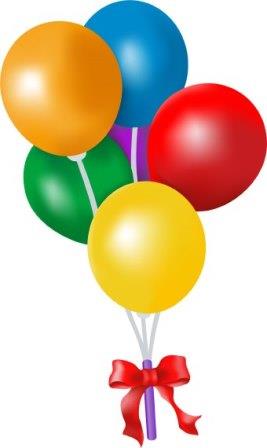 One of the activities in our family's advent countdown was the Balloon Stomp. It would definitely fit the activity level I see at school. It easy peasy too! Every player gets a balloon and blows it up. I think there was a rule of not putting so much air in it that it pops when you look at it! Get some yarn and cut a 18-inch length. Tie one end loosely around your ankle and tie the other to your balloon. Each person can decide the length of yarn between ankle and balloon, the only rule being that the balloon has to touch the ground. Experience has taught that the closer the balloon is to your ankle, the easier it is to defend.

The goal of the Stomp is to break everyone's balloon by stepping on it with your foot. At the same time, you must protect your own balloon. The winner is the last person who has an unpopped balloon.

One person yells "Go!" and the madness begins. It's wild, it's crazy, it's a madhouse. Boy, is it fun! My kids have fond memories of this game and that's the idea. Memories and traditions. Glue that holds us together.

Amazingly enough, I just heard this song two years ago. The great Louis Armstrong originally did it. I actually heard it done by Garth Brooks, but when I went to find it on iTunes the only version I could find was Louis Armstrong. And what a version!

Searching for it on YouTube, I found this incredible video someone put together. It has fantastic editing. There are clips of Armstrong himself singing the song interspersed with period cartoons. It's a treat! Sit back and enjoy: "Zat You Santa Claus"

Posted by Quilting Nonnie at 4:48 PM No comments:

Email ThisBlogThis!Share to TwitterShare to FacebookShare to Pinterest
Labels: Being a Teacher, Christmas, Christmas songs, traditions

Each time I type the title with the days left till Christmas, I have this inward shudder. Many of you probably share this dreaded countdown with me. How many days left until everything has to make it in the mail to get to the __________. These past few years the blank has been filled in with "East Coast." I have a son and a daughter living on the "opposite" coast. That includes a son-in-law and two granddaughters. The gifts have made it every year with some room to spare, but it's always a gnawing in my stomach until I leave the post office with their packages on the way!

My current situation is, admittedly, much better than four years ago when the same daughter as above was deployed and in Germany. But that was still fairly simple because of the military mail system. I only had to mail her things to San Francisco!

By far the worst location and, unfortunately, the worst turn-out was the year my same son as above was stationed in Korea (Army) and same daughter was serving a mission for our church in Japan. (Is it just me or does it seem that the two of them are in "cohoots" to live far away?)

It was getting close to Christmas and time to mail packages. My son's were easy, he was in the military, but my daughter's had to go through the regular mail system, and that is very, very expensive. I decided to send my daughter's Christmas box via military mail to my son in Korea. From there he could mail it to Japan, just a hop, skip and a jump over the little bit of ocean!

The plan proceeded well until Christmas Day when my daughter got to call home. She reported that no Christmas box had arrived from me. That was truly dreadful. Here she was far, far away in Japan. First Christmas without family. And no Christmas presents from home. It was agonizing.

Then January came and went. No Christmas box. February, the same. Finally the Christmas box shows up...at my son's "doorstep" in Korea. I don't know where that package had been for almost three months; I hope it had a good time.

Now the best plan was for my son to mail the package through military mail back to me. I then sent it through U.S. mail to Korea. Into the next month...Easter arrives in Japan. My daughter finally receives her Christmas box...the same day the Easter box arrives from home!

I'd like to believe that it was "all for the best." But it's going to be a hard sell!

One story is enough for a day, so those of you waiting for the Balloon Stomp will have to be patient until tomorrow.

Here is a carol I discovered this year and it's already high on my favorites list. It's done by a group called MercyMe. This carol, written by a member of the group, reflects on Joseph's feelings towards his newborn son.

I searched through all the videos I could find for one that I liked to illustrate the song. None of them were perfect. Each one had something beautiful and right, each one had a part or two that didn't fit for me. Here is the one that I finally picked. The song is so tender and filled with the love of a father. Here is "Joseph's Lullaby."

Posted by Quilting Nonnie at 9:12 PM No comments: