Looking Back and Looking Forward #4

I want to say first thing that I'm very, very sorry, chagrined, guilt-ridden, and apologetic. Especially those in the northern parts of the USA, Russia, South Pole and lots of places around the world. However it exempts places like Australia, South America, and New Zealand.  Now that I think of it, I'm actually a friend, buddy and mate of those living south of the equator. Last week was a welcome break from winter here, especially after spending 9 days in Baltimore. Here in Santa Rosa, California, Northern California, and above-the-equator we had beautiful, wonderful, and astonishing weather. We basked in high 70s temperature. I found myself going outside and turning my back to the sun and glorying in the warmth I felt.

Okay, before I lose some readers because they're shoveling sidewalks or clearing the snow off the car, I'll cease, desist, and refrain from any more weather reports. Except to say that we're going to experiencing more winter-like weather this week. Winter this week is going to be around mid-60's--but there will be wind! We'll have two low days at 56' and 57'. Oh, oh is that a crowd of people holding pitch forks I see coming down the street?

Oops! There I go wandering off topic, and hurting the snowbound people's feelings. Time to focus on what I'm supposed to be doing!

Hurray, it's time to fess up to what I've been doing this past week:


This was my goal for 2 weeks ago and I did make it in time for Poppet's birthday. I just couldn't get my iPhone to spit out the pictures! Well, iPhone still hasn't spit a bit and my gmail app to send them to the cloud wasn't working. My husband, Super Man, finagled a way to get them downloaded for me. (Read more about my husband, Superman, here. So this week, here are the pictures and tutorial on making the alphabet letters. I had so much the week before when making the alphabet letters. And I am thunderstruck by my ability to finish something on time! Usually I start a quilt, thinking I have plenty of time to make the deadline, and am always surprised that I don't make the deadline, then my family member(s) are unhappy with just a "it will be done soon" as a birthday/holiday gift.

I made two vowel letters. I made multiples for letters m, y, d so Ava could spell daddy and mommy! Each letter was made from a different fabric. I had an enjoyable time going through my stash and finding bright fabrics, with some exceptions, to make the letters. 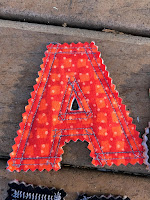 I found an easy method for making these adorable letters on the blog. I got it from Sugar Bee Crafts. http://www.sugarbeecrafts.com/2015/11/fabric-alphabet-letters.html

Here are hints and changes I made:

1.  Pick out fabrics for letters. You can use a charm pack or cut your own fabric. Decide if you want any letters to be repeated, i.e. the vowels. You will also need to cut out squares of the fabric for the backing and for the batting to make the quilt sandwich.
I chose to use batting so that the letters would have a bit of substance. I used 100% cotton batting. 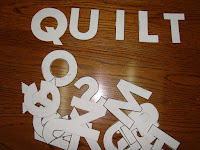 2.  Find an alphabet font and size that you like online. I searched for on pinterest for applique letters. Along with boots, Dock Your Tot, cute tops, there were also alphabet letters! Here's the page I found and used: https://www.pinterest.com/pin/195273333814824125/?lp=true
I printed the letters on card stock so that it would have a thick enough edge to draw around when tracing.

3.  Copy each letter onto its own patch. I didn't pick which fabric went which letter, just in case you think I did that. I'm a scrappy quilter, so I'm very random!

4.  I chose a black backing for all the letters so there would be a uniform color that would "scream" "You've got the letters backwards!" Or something like that! After all, she's only three!

5. Trace the letters onto each printed square. I had to use different products to get a line that was visible. I alternated between Frixion pens, water-soluble pens and chalk pencils or rollers. I try to use Frixion as little as possible because the markings can come back later or they leave a brown line when they should have disappeared. Here is a blog post regarding that: Freshly Pieced and there are other posts about Frixion pens not being suitable for quilting. Just google "quilt marking pens review blog." (There's also a mistake in the tracing on the left! I was tracing over the lines that were already there and decided to get creative.)

6.  Put together sandwich and be sure the right sides are out. I used a glue stick to prevent slippage, which worked just fine. However, just recently I found a tip that was helpful from Eleanor Burns. After you assemble the sandwich you can just iron the sandwich together. The ironing will hold the layers well enough to sew without pins or glue. 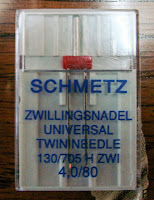 7.  I sewed around the edges of each letter with a double needle. It was the first time I ever used one. It was easy to find one at Joann's and it was made by Schmidt, which is even better.
I chose to double stitch to give extra strength to the edges of the letter; I'm always afraid of edges fraying.

Putting in the double needle is just the same as inserting any single needle. Presto! When using a double needle, you use two spools of thread, but thread them through the same spots on the machine. The front looks like normal stitching but the back looks like a serged stitch. All in all it was so easy! Use a cone thread holder for the second spool, if you have one. Joann's sells a basic one for $16.99.
If you don't have two spindles for the spools, you can make one yourself by putting beans in a pint jar, then insert a pencil and put spool on that. If you are creative or handy you can make a tall hook to run thread through to reach the first disk you have to use on the machine.

8.  Cut out the letters, leaving about 1/4" or more between stitching and cutting line.

9.  Use pinking shears to cut around the letter. Cut fairly close to stitching. This creates another defense against fraying. But, after all, it makes a darn cute stitching!

And now, a less lengthy review of the other two goals from last week!


2.  Making my BOM block.
To see more about the BOM Challenge that I am working along with, go here.

With the start of February was the time to make Block #9 of As Time Goes By. I'm on a roll because I finished that this week also! 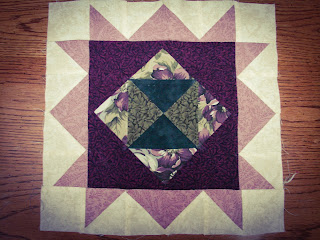 3.  Figure Out Layout for Military Mom's Memory Quilt
I am still baffled by how to put different thicknesses of fabric and texture together to make this quilt. (See backstory here) I emailed Sarah Craig of Confessions of A Fabric Addict. Sarah makes memory quilts on commission and she was suggested by my friend, Terri, as a source. I have received an answer from Sarah; she said she hasn't done a memory quilt like this. Sarah has done many t-shirt quilts and that is what I had anticipated. She suggested I talk to the Mom again and find out what is most important for her to have on the quilt. Sarah also suggested I look on Pinterest, which is where I will head later today.

4.  Start Cutting Out Firstest's Quilt
Well, I only had a consult with my quilty friend about what we had decided six months ago about which fabric was going to be used where.


I only have one thing to do this week: Start Cutting Out Firstest's Quilt. I need to put the pedal to the metal if I'm going to get this one done. I will need to quilt a lot more than I have in the past couple of months if I want to make this quilt on time.

See ya next week!