It's Fair Time here in Sonoma County! Tomorrow Noel Heart & Chief are coming by at eleven and off we go for the day!

Fairs are grand! So much to see. So much to eat! The contests and shows.

Where should I go first? Ah, now that's a silly question.. 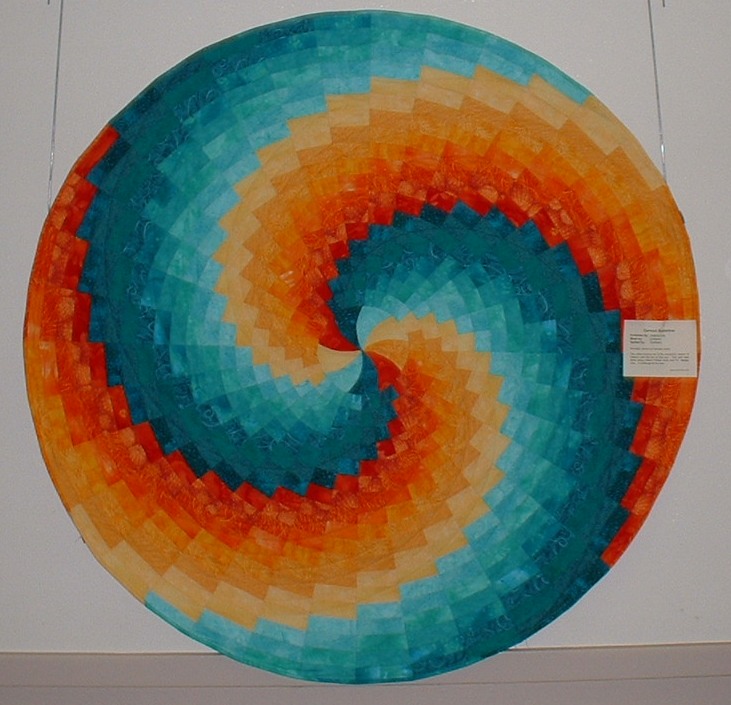 I smell food! Time to eat! I've just got to run now....so much fun awaits!

Good grief, Charlie Brown! My kite got stuck in a tree. I spent all day Wednesday getting it down and now I missed the day to post my blog about you and your friends. Arghhh!
In Santa Rosa is a long-standing icon. The Flamingo Resort Hotel & Spa. Opened in 1950, it is notable for its large, revolving flamingo atop a 50-foot pink tower. 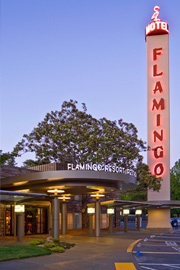 The flamingo purchased 8 Peanuts statues and has 3 or 4 in a display case in the lobby. The remaining statues are spread around the resort. Anyone can visit the resort and take pictures of themselves with the statues. 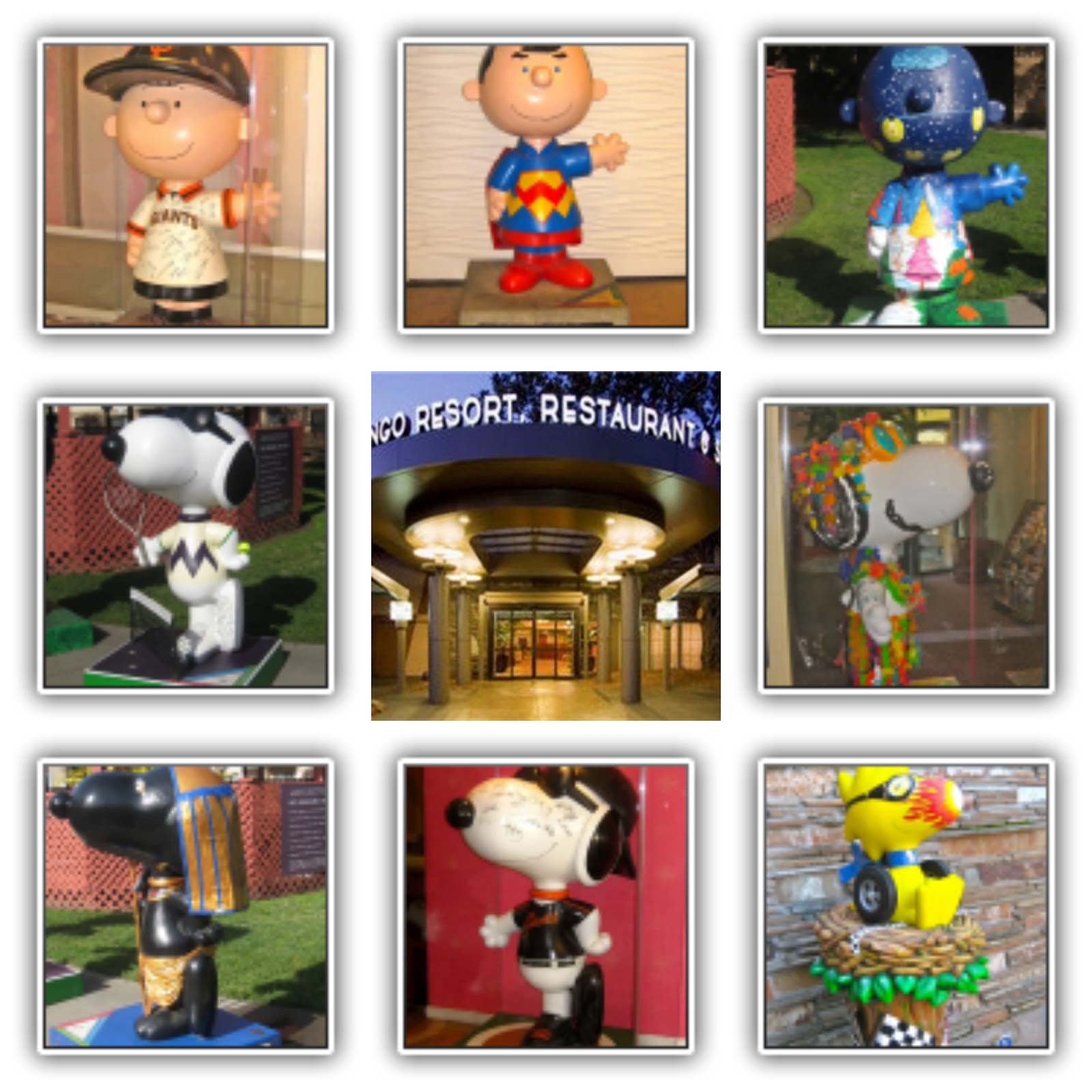 
Hmmm…would a name change for the resort be Peanuts? A giant Charlie Brown rotating on a 50-foot tower?

The winner is Terri from QuiltNCards She made a sweet comment about Peppermint Patty: "I did admire that [Peppermint Patty] takes care of herself and her Dad, and plays a really good game of baseball. I don't admire the D- that she gets in everything, but given her situation at home...it's kind of a given.
"And that crush on Chuck - and he doesn't even notice...
(heartbreaking)."

Here's this week's question: What was the original name for: The comic strip? Charlie Brown? Write your answer in the comments below. The answer will be in next week's blog!

Twiddling your thumbs sometimes comes up with a good idea.

I started thinking about common everyday objects. I wondered how long these ordinary things had been around. I looked it up. Presenting to all those interested dear readers is my "Happy Anniversary List"!

It's been described as the solution to a problem nobody realized existed. source

Once a rarely used key on the typewriter, the graceful character has become the very symbol of modern electronic communication source

Today I think we will give a little depth to the history of the automatic transmission.  It really is a marvel to behold and yet we take it for granted, just as we have come to expect the sun to rise and set with regularity. source

The sport that evokes more nostalgia among Americans than any other is baseball.

“Some people believe football is a matter of life and death. I'm very disappointed with that attitude. I can assure you it is much, much more important than that.” –Bill Shankly source

To quilt is to live. source 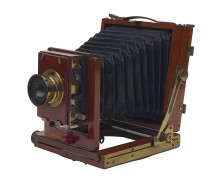 “The single most important component of a camera is the twelve inches behind it.”  Ansel Adams source

It is not true, as the humor website Cracked satirically suggests, that oatmeal was invented by a research scientist at Britain's Royal Academy of Adhesives and Sealants during an experiment in search of new forms of industrial glue. But if your idea of oatmeal is the pasty variety made in a microwave from a packet, the story can seem plausible. source

An 18th century fancy of the royals and wealthy in Europe, the love of lawns spread to places where they could not be maintained with natural rain. It became necessary to carry water to areas that needed supplemental supplies and as the popularity of lawns spread, this required more and more extra effort. Sprinklers, invented in 1871, made lawns possible for everyone. source

…there are certain people out there, who live, breathe, eat and drink envelopes. source

Is this really Monday? Design Wall? Not in Nonnie-land!

We had Hubby’s youngest brother visiting us this week. We enjoyed having him here the entire time! There was lots of catch up to do since we haven’t seen him in about 10 years.

You know the old saying… “Guests, like fish, should be thrown out after three days.” It was certainly not true with Younger Brother. I felt at home having him here which, in itself, is a milestone.

While he was here I got a chance to sort through some scrap bins. It was loads of fun, but I made myself a load of work!  My quilt room now looks like a bomb went off in there! 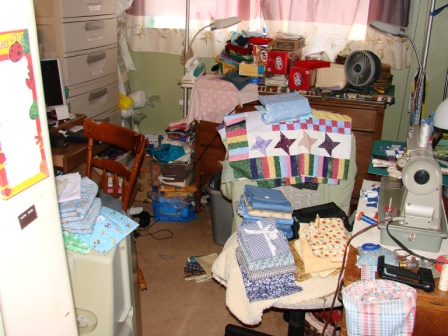 Can I just stop here and quote, loosely, Michio Kaku: “It’s pointless to have a nice clean desk, quilting room, because it means you’re not doing anything.” 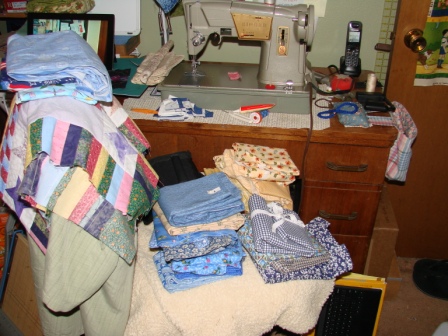 Either I’m a hamster running on a wheel or I’m reorganizing! 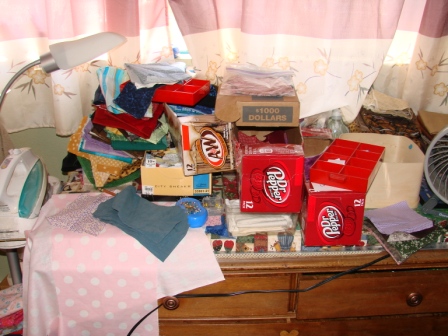 I’m sorting scraps by color and storing each color in a soft drink box. And don’t try to cozy up to me now! I do not have $1000 dollars in that box on top! I would tell you what’s in the box, but I’ve lost it in the mess “gentrification” project.


Saturday I engaged in re-allotment. Which is defined in Nonnie’s dictionary as moving fabric around to make more room and ending up with just the same amount of fabric just in different locations!


As a result I now have three drawers for blue, instead of two: light blue, medium blue and dark blue. And up- cycled one drawer to two for red and green and … Well, I don’t want to make you depressed because of all of the beautifulness of my organizing. Because all I did was take stuff that had been in drawers to make more room for certain colors and put previous stuff in boxes. I still haven’t figured out where those boxes are going to go!


And now, dear readers, my story is told. If you want to see real design walls, check out these sites. Real quilters! Real projects! Just click on a badge from the right sidebar.

Wait! Before you leave, here is the status of the blue block I reported on last week:

Don't adjust your monitor! There is a picture there. And it is what has been done on my blue and white block. More here about said block.
Posted by Quilting Nonnie at 11:42 AM 8 comments:

Quilts From My Sewing Machine #7: Marie & Me 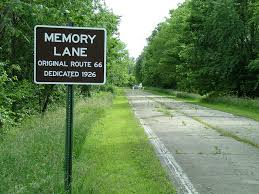 You’re in for another trip down memory lane in a quilt that is a collaboration between my Aunt Marie and myself. Those who read my blog know about my muse, my Aunt Marie.

I believe in putting labels on quilts! (Yes, I'm still talking about the story of my quilt collaboration! Patience is a virtue!) Most of them are small, but on two I wrote more of a provenance. Marie and Me is one of them. And here is what the label says: 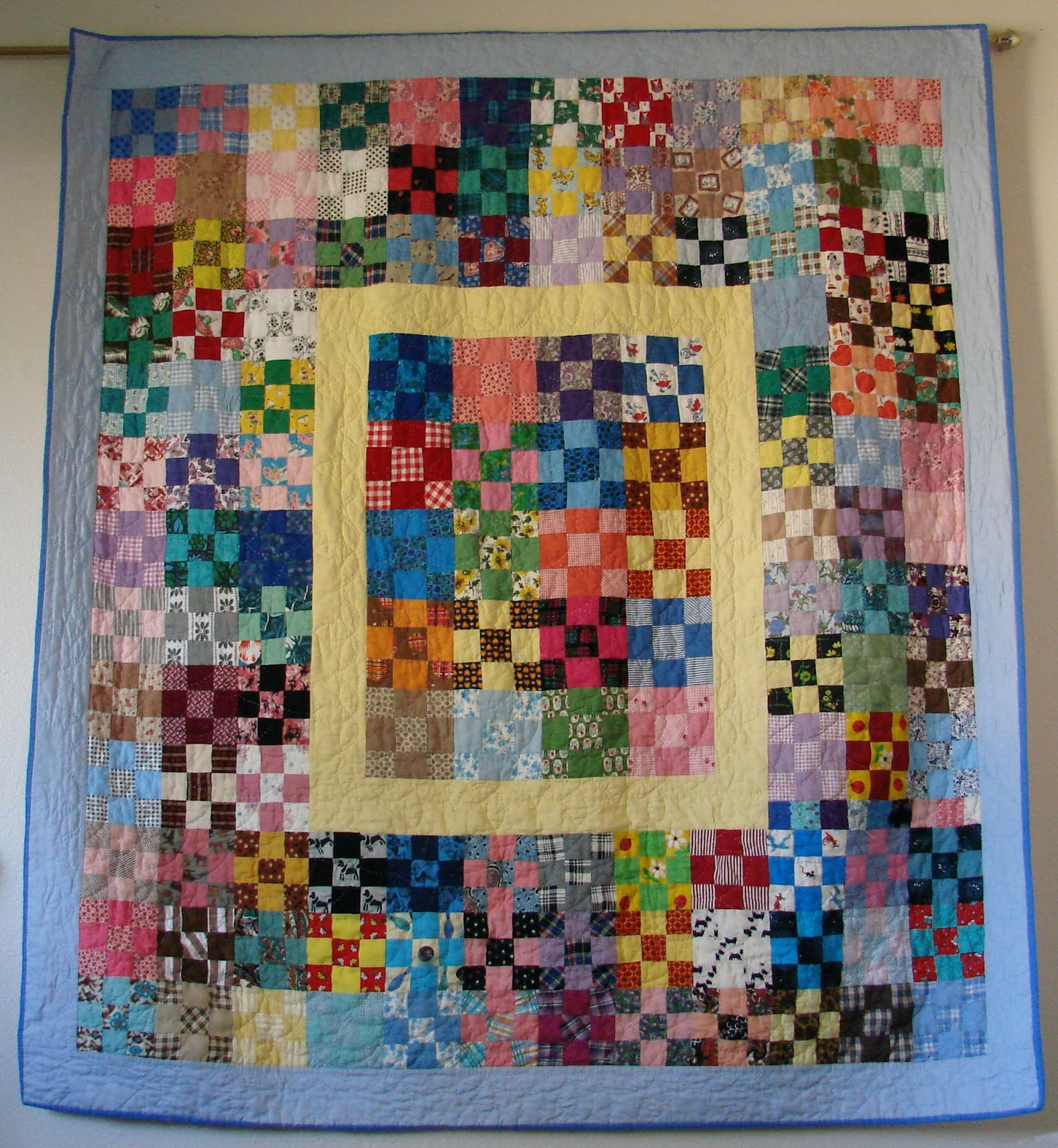 "My Aunt Marie (1905-1997) was a gifted quilter. When I was eight years old (1963) she cut two-inch squares into sets for me so I could make nine-patch blocks. I started hand stitching the blocks together but eventually stopped. When I was around eleven or twelve, I picked up the project again and did more blocks. I finally ended up with around 20 blocks with more waiting to be done. 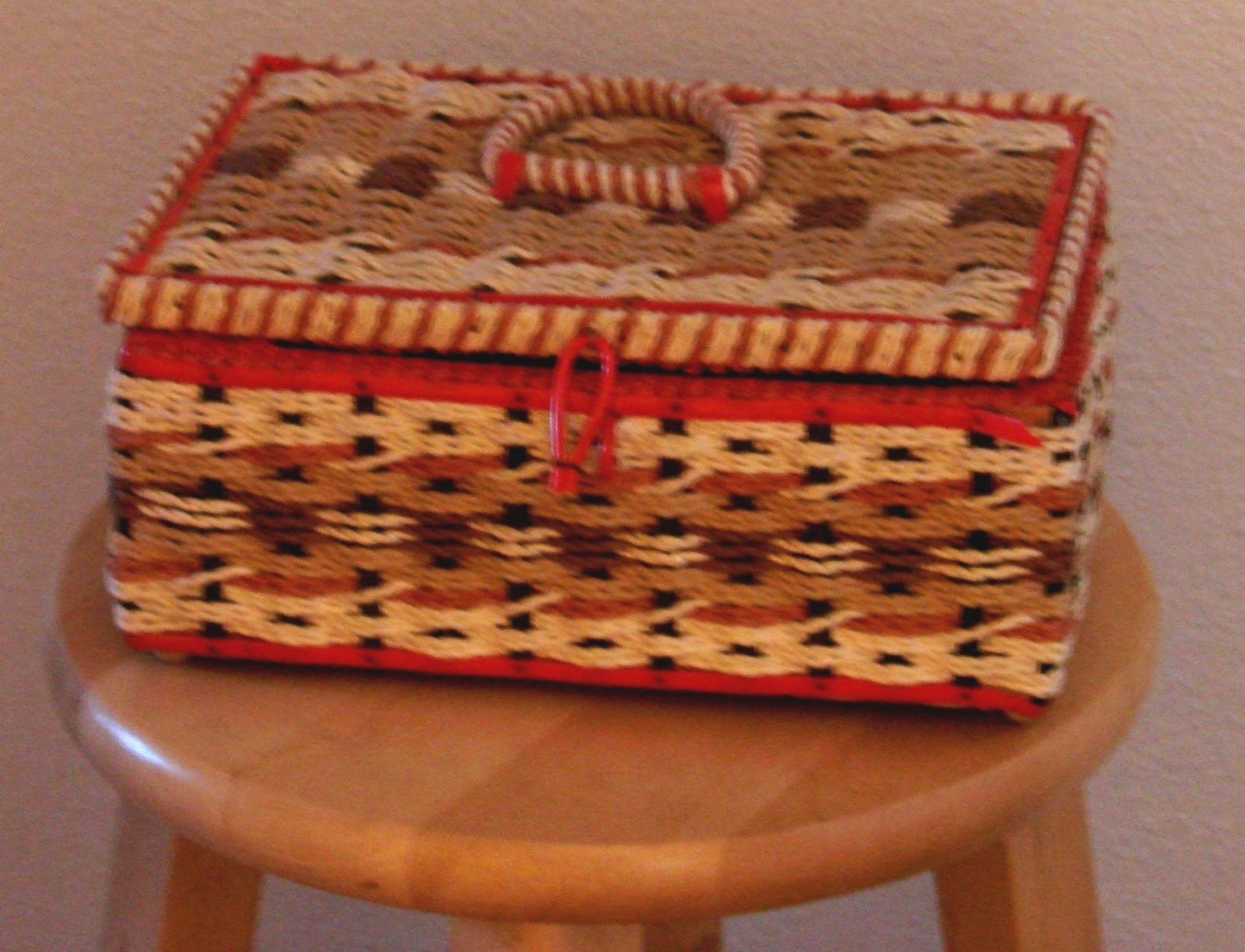 I had the blocks and squares stored in an old red wicker sewing basket. It followed me through moves, school, college, marriage and children. In 2006, I became interested in quilting. I pulled out the red wicker basket and decided to finish my first quilt. I had to square off the completed blocks, which made them fat in the center column. I wanted them to be highlighted in the finished quilts. All the blocks I did as a child are inside the yellow border.

I squared up the remaining two-inch squares and sewed them into blocks. In order to have the quilt turn out correctly, I delved into my aunt's stash and made a few more blocks.”

(There is a secret in the quilt. When I was assembling the quilt, I did it in sections: top section, bottom section then the two side sections. When I went to assemble them I found one side section was shorter than the other, by two inches! To make both sides even, I made a row of single squares and sewed it to the bottom of the shorter piece. No one has ever noticed it and it blends in quite nicely. To keep the secret, I'll not tell you where the extra row is!) 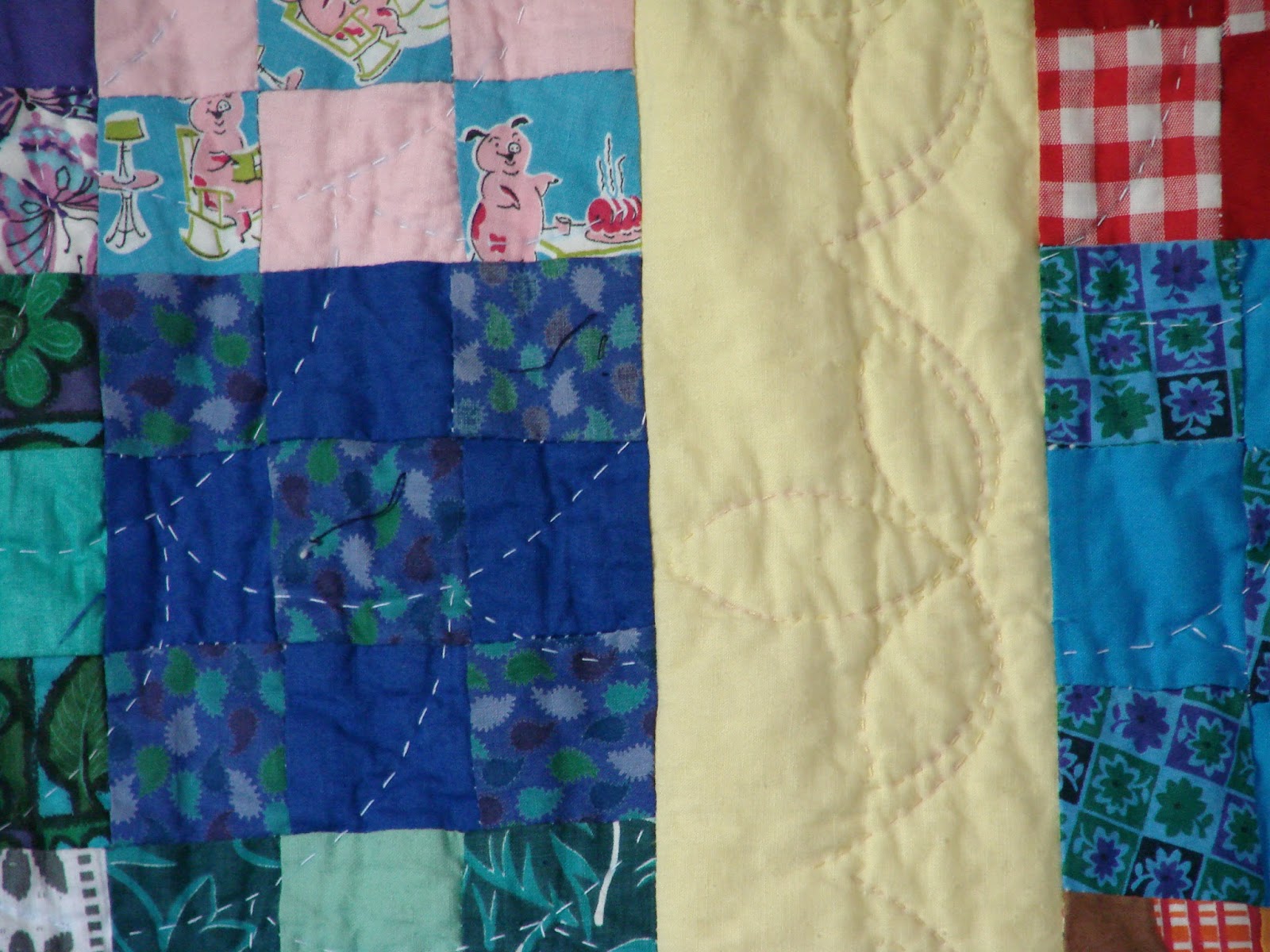 “By the time I got around to finishing the quilt in
2009, I had already made quite a few other quilts. Those quilts were all machine quilted by a professional. A good friend of mine, an avid hand quilter, convinced me that I should hand quilt Marie's quilt. I thought it fitting to do it by hand because all of Aunt Marie's quilts were hand quilted. This was 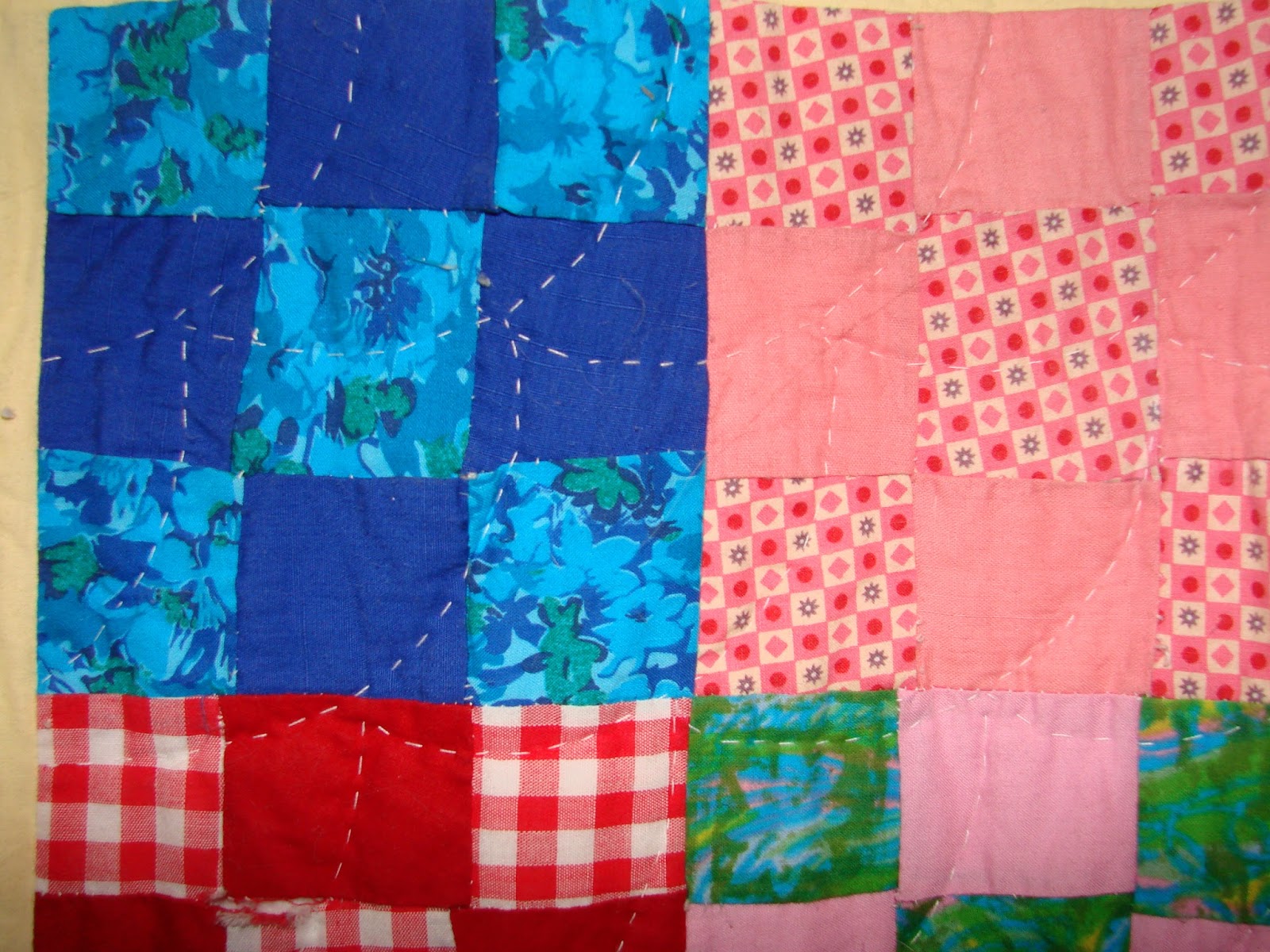 the first quilt that I hand quilted. From where I began to where it ended, it showed the progression of my skill as a hand quilter. I chose to do a Bishop's fan pattern, and there are many funny fans! I was using a template, but now know a much easier and better way to quilt that pattern.

Thanks, Aunt Marie, for your legacy.”

Marie and Me hangs in my bedroom. I deeply love this quilt. I have spent many hours before sleep, before getting up and just lazing on my bed looking at all the blocks and different fabrics. At night, with lights out, it is changed into a study of light and dark. With the street light coming in my room, all that can be seen are light and dark blotches. It is a mottled effect and I love that view of it also.

It is just a humble nine patch quilt, but it enchants me.

I also write posts about Aunt Marie’s phenomenal quilts. Here are links to those posts. Get ready to be amazed!
The Gallatin Quilt
Mystery Stars
Pixelated Ponies