I’ve noticed that pixilation quilts and blocks have started to become popular. My Aunt Marie was ahead of her time! She quilted a amazing example of pixeled posies in a quilt. It’s also been one of my favorites. In fact, I’ve wanted to make one just like it, but probably in different colors.

This is a close-up of one of the blocks:

There are lots of little blocks in that one square. I believe they were 1-1/2 inches in size.

When I inherited Aunt Marie’s quilts, I let each of my children pick one they wanted. Nancy Drew picked the Mystery Stars. TGS picked the Orange Poppies with Red Quilting, which I have not written about. I also let my Sisty Ugler and my DMIL (who quilts) pick one.

My DMIL chose this quilt, which explains why I don’t have better pictures of it.

My new mission, intrepid as I am, is to ask my family to send me the quilts so I can photograph them  When I started taking pictures of quilts, I didn't do a very good job. (fine example above!) Now I know how to get much better detail, to take more close-ups of quilting, blocks, backing and other notable features.

I will also get the quilt appraised at the same time. I get such helpful information from an appraiser. I will be thrilled to hear about the pattern, the fabrics, the time period and quality of construction.

Since I have so little information on this quilt, I'll tell you a story about my Aunt and Uncle.

Aunt Marie and Uncle Elbert lived in the Santa Ana hills outside Anaheim, CA. My uncle, who was a carpenter, built a home for them in the 1950s. They lived there until the 1970s. The area they lived in was susceptible to the wild Santa Ana winds. When the winds were combined with a wildfire, it was extremely dangerous.

At a time when I was in high school, just such a fire was in the area where my aunt and uncle lived. My uncle was hosing down the house and some of the grounds around it, hoping to protect the house from catching fire. He sent my aunt ahead of him and continued to hose down the house.

When it was time, the only thing that mattered to him was to save Aunt Marie’s beautiful quilts. He grabbed them and put them in the back of his truck and headed down the long gravel road to the highway.

This gravel road had been dug through a medium-sized hill to make a small road. The hill rose up on either side of the road, about six feet higher than his truck.

The fire was on one side and jumping the road to the other side. As he drove down the road, a piece of smoldering wood landed on one of Aunt Marie’s quilts. Uncle Elbert immediately got out and began hitting it with his bare hands. He put it out and then continued down the road.

All of the quilts made it safely to less treacherous spot. There was just a small spot on the quilt where the burning piece had landed.

My heart always aches and is proud at the same time. The most precious possession that my uncle wanted to save in a fire were his beloved wife’s quilts! The scene of him jumping out of his truck and killing the spark with his bare hands is amazing.

There was good news all around, the house was safe and the grounds around it were also not burnt.

My uncle was his wife’s biggest fan. He always wanted to show off her marvelous quilts. He was a taciturn guy, but he showed his big heart that day.
Posted by Quilting Nonnie at 5:14 PM 3 comments:

I live in Santa Rosa.

Do you know who else lived in Santa Rosa? 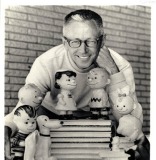 For the uninformed, he wrote the Peanuts comic strip. He started drawing the comic strip in nearby Sebastopol in 1958, then moved to Santa Rosa in 1969. One of my favorite “Peanuty-ness” are the statues all around Santa Rosa.


In 2005, five years after Charles Schulz died, the city began an event called, “It’s Your Town, Charlie Brown.” Scores of unpainted, fiberglass statues of Charlie Brown were available for purchase. The goal was to have painted Charlie Browns all over the city.


This is Charlie Brown on Railroad Square. Like many towns, a railroad ran down one side of Santa Rosa. While there isn't any train now, the depot remains and it is the Welcome Center. What used to be the downtown stretched a couple of blocks from the depot. It is now called Railroad Square. So our guy, Charlie Brown, is a conductor complete with watch and his characteristic chevron stripe.

I loved Peanuts cartoons and read books of them voraciously when I was a child. The statues are great fun to see & photograph. The downtown Welcome Center has maps of where the statues are.

You can go on Google and find pictures of all the Charlie Brown statues. I could even download them. Instead I decided to go photograph them myself. I can get front & back views and detailed pictures.

Wednesday is going to be the day to check in at Quilting Nonnie’s blog to see a weekly Charlie Brown statue photo.

For today, leave a comment telling me which Peanuts character was your favorite?

I’ll even keep a tally and report back next week!

P.S. Mine was Snoopy!

Caught Up At Last!

I caught up with my Rainbow Scrap Challenge this weekend. Hurray!

Last month, May, the color was green. Just couldn’t get “a round tuit” because (everyone join in!) school…


This month is yellow and I’m finished already. There’s a first time for everything!

Here are the greens:

The blocks in the bottom row of four contains some special blocks. Left to right: Daisies from a vintage sheet, I think I had that exact pattern on a sheet in the 60s? Plaid, I lovey dovey plaid! Realio, trulio 30s fabric from my Aunt Marie’s stash, froggies from my Sisty Ugler’s stash.

Now that I’m half a year into RSC, I’ve come up with a plan!

For each color, I want one plaid block, one vintage block and quite a few novelty fabrics. I don’t have many novelty fabrics and especially in my past quilts. I decided that I’d like to get a bunch in here for the giggles.

The bottom set has the special ones. Left to right:
Row 1: Authentic 30s fabric, a yellow I adore, used sparingly, plaid,
Row 2: vintage gingham (like you can tell!), a baby print (nothing special), a quilt from our local guild show 2007

Row 3: My dad and I—Happy Father’s Dad!, A silly photo of my hubby wearing my sisty ugler’s glasses and my grandpa’s hat, my sisty ugler 1989.

Hooking up with Rainbow Scrap Challenge (badge on the left) and the wonderful blogs listed on the right. Be sure to check them out and see other quilter’s wonderful work.
Posted by Quilting Nonnie at 10:41 AM 10 comments: