Barely a few minutes after I posted my Get It Done list, I received a text from my son. "Move number four up to number one and it will be perfect!" Of course number 4 is starting on the Double Wedding Ring quilt. This is the wedding quilt for him and his wife. Wouldn't you know that a few moments later his wife chimed in with a cute remark about abandoning numbers 1-3 and just doing the DWR. At least both were happy that the DWR was on the list and that I was planning on "working furiously" to get it done.

This is a picture of the two of them on their wedding day. They were married in Virginia in June 2012. They had it in a bed and breakfast in Leesburg and the wedding was in the back of the inn. As part of their wedding package, the whole inn was rented out and the family of both sides got to stay there. It was utterly fantastic. The entire inn and room were enchanting. 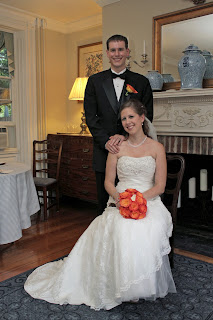 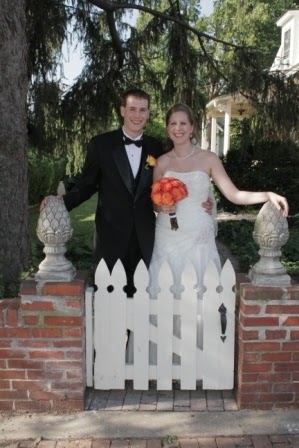 It was not too bad in the weather department, for late June in Virginia. But doesn't this picture look so wonderfully green and shady? One thing we learned there was that the pineapple is a sign of hospitality!

We had the "mandatory" wedding pictures of family. Then, of course, my side of the family began to show their true colors. 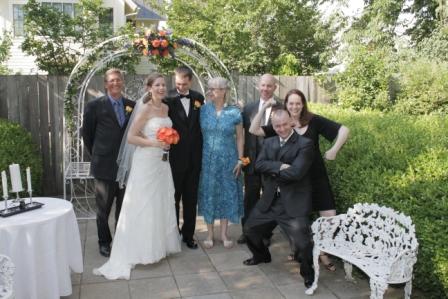 This is by far my favorite picture of the wedding. This was taken after the wedding as they were "walking down the aisle." There is so much love and bliss in their faces. And let me tell you, if two people every deserved to be happy and crazy in love, it's these two. 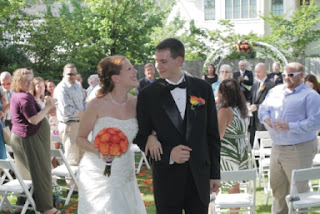 You've seen these lovely portraits of my son but truly his personality is more like this:

That is my middle daughter with her brother. I cannot tell you how many pictures I have of these two growing up where they are goofing around. There's another in the wedding picture of this daughter and her husband being silly during a family picture, but I'll spare you.

If you want to sum up my son's personality, this picture is pretty representative. 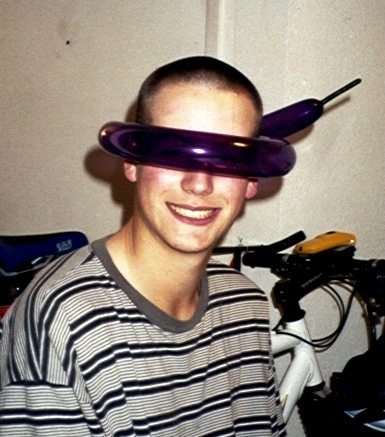 When he calls me when I'm quilting with a group, I let him know I can't talk right now. Then he proceeds to tell me about the quilts he's making. He'll name an actual quilt pattern, like Log Cabin, and tell me he's almost done and it only took 2 days. Whenever I press him about giving me a quilt, he says he gives them all to charity. The goof.

When he texted me about making the DWR the top of the list, I told him since he could quilt he could help me out. He just said that he was too busy making his own quilts!

I can tell you life was never dull around our house when our son was growing up!
Posted by Quilting Nonnie at 4:55 PM No comments:

Email ThisBlogThis!Share to TwitterShare to FacebookShare to Pinterest
Labels: DWR, my son, son and wife

You know the saying...A day late, a dollar short. That's me. Monday is the day my husband works until 6:00 pm. This gives me 3 hours home alone which is always my quilt time. It's wonderful to quilt for a whole 3 hours straight! Last night I had to do my favorite task: Budget. It took the beloved 3 hours. Then at 6:00 when hubby was home, we scrounged around for dinner. At 7:00 we settled in to watch "our team" Sacramento Kings play basketball. I was so tired from my first day back at school that I went to bed at 8:00! So, no blog.

Without further ado, here's my Getting Her Done list for January!

1.  Get Spider Web quilt top finished and sandwiched.
All blocks are finished, need to put Fray Check on red fabric that turned out to fray amazingly fast. Sew blocks together. Put on borders. Sandwich.

2.  Get Bricks and Stepping Stones finished and sandwiched.
I have the top finished. Put on borders. Sandwich.

3.  Finish Marie's Square in Square.
This quilt was done Quilt As You Go, my first attempt! I need to  hand sew the last column. Put on borders. Attach binding.

4.  Start my son & wife's wedding quilt: Double Wedding Ring.
My son and his wife had a 6-week engagement. So very nice of them in letting me make a wedding quilt! I am using the Quilt Smart piecing to make it. It's basically paper piecing, except they provide the patterns printed on a very light woven material-which I can't remember the name. I already have the material. So it's getting it started, which might just be sewing one piece onto the foundation! At the same time, start my #1 daughter's quilt as a Leader/Ender.

This is fairly ambitious for me. I am back at work; I'm a teacher. I don't get much quilting in during the school year. I am committed to quilting at least an hour a day. Hard to do, but I am especially committed to starting the DWR (Double Wedding Ring) and working furiously to get it to them on their first anniversary, June 7, 2013.

Email ThisBlogThis!Share to TwitterShare to FacebookShare to Pinterest
Labels: Being a Teacher, Get It Done 2013
Newer Posts Older Posts Home
Subscribe to: Posts (Atom)