Today is the day my dad died. Every year I remember him on this date and also his birthday, March 11. I was four when he died. He was 31. He had, what was then, a terminal illness. He had Addison's Disease, an autoimmune disease, which is now treatable, but not curable.

During my sophomore year in college, I took my phase one class in Elementary Education. One of the first assignments we had was to write our history. The following is an excerpt from that assignment, written when I was eighteen.

"The first four years of my life I lived at a California Division of Forestry fire station, my father being foreman of the station for our small town of Yorba Linda. I was, what my mother often calls: "my father's shadow." I would follow him around the station as he did his work. Sometimes during the day, my sister and I would come into his office and he'd stop whatever he was doing and talk with us. Once in a while he would give us one of the fire prevention posters as a treat.

Although my memories of my first four years aren't too vivid, some of the scattered recollections I have are of after dinner time. When Jan and I finished eating, we would crawl under the kitchen table and play with Mom and Dad's feet. They would always ask or comment to each other in wonderment that "there must be mice in the house" and "what are we going to do?" After dinner, Dad, on all fours, would chase us around the house; or we would play Button, Button, Who's Got the Button? or Hide the Thimble. Other times, Mom and Dad would wrap us in a blanket like a hammock and carry us around the station. Before they let us out, we would try and guess where we were. It was always a surprise to look out and figure where we were. I recall a lot of happy times then, not specific events, but a secure feeling of well-being.


Dad was always cheerful, whistling wherever he went. He seemed to be one of the spirits God blessed with an attractive personality, full of giving and concern for others. He always had a kind word for everyone; people who knew him say they can't recall him ever being unkind or hurtful to anyone.  Dad had many, many friends who loved him dearly and he loved them all too." 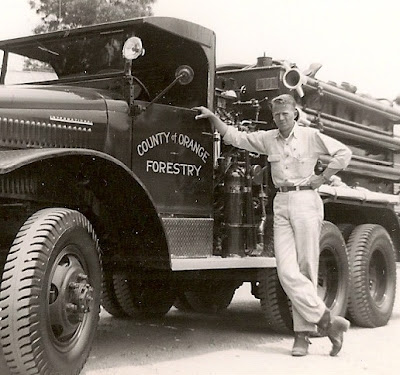 Here is a poem that my Mom read to me while I was a child. She said it described my Dad.


THE MEASURE OF A MAN
Anon.

Not--"What was his station?"   But--"Had he a heart?"
And--"How did he play his God-given part?"
Was he ever ready with a word of good cheer,
To bring back a smile, to banish a tear?


I am a Mormon, a member of The Church of Jesus Christ of Latter Day Saints. What held me together after Dad's death was the knowledge that he has gone onto another place that I will someday be also. In many churches, people "bear testimonies" of what they know is true. The following is my testimony of my dad.

On this anniversary of his death, it is only the death of his body. We have eternal spirits and they cannot die. They are our essence and who we are. In this life we have a mortal body and an immortal spirit. When we die, our spirits return to our Heavenly Father to continue to live through the eternities. I believe in life after death. I know that families will be reunited after death to live together again.

I often think about my family "on the other side". My mom and dad together waiting for my sister and I to come, but willing to let us have our life here on earth. I think of reuniting with my dear uncle and aunt. I look forward to being with my grandparents and friends.

I have a Dad. I know what a dad is like. My father was loving and wonderful; he had a great sense of humor, loved music, loved sports, loved to have fun. People loved him; I loved him. My mom adored  him. He loved my Mom. He loved me; he called me "clown." He thought I was cute and wonderful. I followed him everywhere. My mom called me his little shadow."

I can testify to you of the deep influence of a father on his children. Even though my time with my dad was small, he has had tremendous impact on my life. I can still remember his love for me. I still have the feeling of being cherished by him. I know of things he valued in me. I remember, value and try to emulate many of his traits. If four years of parenting can yield so much, then think of the influence a father has on his children throughout their growing years.

I can testify to you of love that lasts beyond death. I loved my dad dearly when he was here on the earth. He was a super dad! I love him still. I miss him still. But I know that the bonds of family are for eternity and I look forward to seeing him again. I cannot tell you how the promises of an eternal family have consoled me. I can tell you that my father died, but his influence and his love and participation in my life did not end. I testify of my father's continuing care. He lives still and he has helped me through many difficult times of my life.

Posted by Quilting Nonnie at 3:09 PM

Email ThisBlogThis!Share to TwitterShare to FacebookShare to Pinterest
Labels: Death, Eternal Life, My Dad, My Family