I had to correct the countdown above. Somehow I was off by one day! Actually the "somehow" doesn't actually apply here. I live in the land of "somehow", "I don't remember," "Did I say/do that?" ________ (fill in whatever phrase you want).

I think I know what day I'm leaving for Nancy Drew's house, what airline I'm using and the time the plane leaves. It's probably the one thing that I do know. That is unless I'm remembering but all the info is wrong!

Welcome to my world. It's probably inhabited by many of you! So if you see someone looking like my profile picture, introduce yourself!

I still have two presents in the making! The secret present I've been talking about is just about done...just the binding. That will get done today, or else! The second one is another secret. It will get done by Sunday night! Ah, the conniving, secrecy and fun of Christmas gift giving. In our house there was (and still is) a policy: Don't ask questions around Christmas and no shopping for yourself during the month of December!

When I was growing up, there was a quasi-tradition in our home. On Christmas Eve day, my step-father would go out and buy his very own hand-picked presents for each of us. It was always very 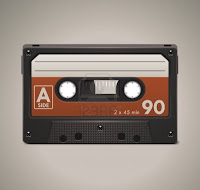 exciting to get something that just he had picked out. I was thinking about that this morning for the first time in a long time. I do remember one present. He gave me a case for storing cassettes. (For the young & uninformed, cassettes were how we listened to music in the space between records and CDs.) The cool part about the case was that it contained two compartments. You opened the top and there was a row of cassettes. Then flipping the case over, after closing the first compartment, and there was another storage area for more cassettes. I used that for years and years. It was so compact!

I'm hoping you have all your Christmas shopping and mailing done and can sit back and enjoy the season. And if you have children at home, lucky you!
I'm making it another two-fer day!
The first is from the last Bing Crosby Christmas TV Special. It was done in the 1970's. One of Bing's guests was David Bowie. I remember it was really odd to have someone like David Bowie appear with Bing. Apparently Bowie accepted because he knew his mother liked Bing Crosby. He didn't, however, like the song choice: Little Drummer Boy. He asked if there was something else they could do and someone wrote a counterpoint to Little Drummer Boy. This song has become a classic of Christmas songs. Bing Crosby died a month after taping this show.
I heard the second carol when I bought a CD of The King's College Choir. About a decade ago, Wherehouse (video/CD store) also sold used CD's. They contributed greatly to my large CD collection. At Christmas, I would make sure to hit Wherehouse looking for used Christmas CDs, especially the ones that were two bucks. This is how I discovered the King's College Choir, a choir of men and young boys. They make beautiful music! Gabriel's Message is a song that I first on their CD. Later I also heard the version done by Sting. I like them both equally. I couldn't find a version of Sting performing it, so I chose to post the King's College Choir. If you haven't heard Sting's version, go to youtube and look it up.
Wishing you the best this Christmas season. God Bless.

Posted by Quilting Nonnie at 11:16 AM