The Design Wall has been doing pretty well, if you count that the "secret" project is now in my sewing machine being quilted. I can't wait to show you! It's a winner.

In the meantime, here's an update on the quilt for the "newlyweds." My son and his wifey got married in June 2012. They only had a 6-week engagement. I don't know about you, but I can't make a California King quilt in 6 weeks. In fact, I haven't been able to make it in 18 months! But I chug along.

A few months ago I posted the design wall with my progress on this quilt. The most recent progress is unfortunately on my iPhone. I switched phones and carriers just a month ago. In the meantime, my iPhone has been serving as and iPod since all my songs are there. It also had my camera roll. Cursed me! Since January of this year, the photos had not been backing up to the computer and I, like many of you, just let it go. "I'll get to it soon," I foolishly promised myself. Then my "soons" ran out. My iPhone has died. It won't charge. It died with my photos inside. I'm grief-stricken, and when I'm not I'm kicking myself for not getting the photos off of it. I'm in for a little work to get them back, but I will get them back! I will be triumphant! They cannot thwart me! I will put every last breath into getting my photos back! (Tune in soon!) 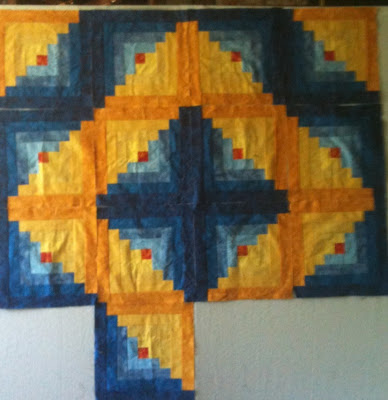 On to a much brighter topic: The Christmas Carol Countdown. For those of you who haven't seen this on my blog, here's an explanation: I started on December 12 to countdown the 12 days till Christmas with Christmas Carols. In addition, I'm sharing stories about my family when the kids were young. We had an advent calendar that I used to give us a daily Christmas activity to do during December. If you want to see the Carols from the first day, click here. Then just on "Newer" at the end of the post and you will progress through till today.


Here's another item from our early family's Advent Activity Calendar. It starts with a young me. Wow were our Christmases spectacular! I always got lots and lots of presents. Even then I remember feeling a huge sense of letdown when the last present was opened. It wasn't a greedy feeling, but I felt that there should be more. Time passes and I'm a young mom. Christmas is more commercialized than when I was a child and it rates a two on the over-doing it scale compared to present day with its over-the-top money, money, money, and buy, buy, buy and more, more, more attitude.

We didn't have much money back then. My husband was just out of college working his first big job. I was a stay-at-home mom. We did a lot of scrimping and doing without. When Christmas rolled around, I worried that my children would feel they weren't getting enough presents. Actually, they weren't. I wanted them to understand the joy of giving and the spirit of Christmas.

In the first year of my marriage, I had read the entire set of the Laura Ingalls Wilder books. I had never read them when I was younger and I adored these books. I loved the ways they made do and did without.

One particular story and phrase has stuck with me from these books, it is in Little House on the Prairie. Pa is getting ready to go to town. He has borrowed some nails from Mr. Edwards and needs to buy some to pay him back. It took four to five days to get to town and back and he hasn't been in about a year. Finally Pa decides he'd better "go and get it over with." He equivocates that he could stay back. Ma reminds him that they don't like borrowing and that he has also borrowed tobacco. Ma is almost out of cornmeal. Finally Pa says, "We could get along all right, if I didn't. There's no need to running to town all the time, for every little thing."

I remind myself of that when I start to think of buying something that I think I "need." How much can I get along without? What is necessary? Have you noticed that now in advertisements that "deserve" has replaced the word "need." Now you really "deserve" to buy a new car, or "deserve" the latest vacation. We are a long ways away from what our depression-era parents and grandparents learned and what the quote teaches: there really is very little we actually have to have to get along.

But I digress...back to the Advent Activity. In my effort to instill good values in my children, one night in the days before Christmas the slip would read, "Little House on the Prairie." In this same volume is a story titled, "Mr. Edwards Meets Santa Claus." On the prairie it is Christmas Eve. Laura and Mary are worried because there is no snow for Santa Claus to travel with his reindeer. The creek near their home is swollen and roaring. Mr. Edwards had been invited for Christmas dinner but now won't be able to make it because the creek is too high. It is a very disappointed Mary and Laura who go to bed and to sleep. Sometime during the night, Mr. Edwards makes it to their home. He has brought presents from Santa. Laura gets a tin cup of her very own; until then Mary and Laura have shared a cup. They have each gotten a long stick of candy and a very pretty heart-shaped cake with white sugar on top and made from pure white flour. In the very bottom of their stocking is a shiny penny. They marvel at their gifts and stare and stare. Laura writes: "They had never even though of such a thing as having a penny. Think of having a whole penny for your very own. Thing of having a cup and a cake and a stick of candy and a penny. There never had been such a Christmas."

My children loved this story and eagerly looked forward to it each year. A few years ago, Nancy Drew called from Massachusetts on Christmas Eve. She wanted to read the Little House on the Prairie Christmas story to her new seven-year-old step-daughter. I scanned the story and sent it across the United States that night so a tradition could be handed down to another generation.

Tonight's carol is from Brad Paisley. You'll hear in the introduction that he wrote it when he was 13 years old. It's called, "Born on Christmas Day."

And a special treat for you:

I'm hooking up with:
Patchwork Times
Show and Tell Tuesday
Fabric Story
Freemotion by the River
WiP at Freshly Pieced
We Did It Wednesday

There are buttons in the right sidebar to take you to these places. Go check all the goodness in other's design boards!
Posted by Quilting Nonnie at 3:00 AM