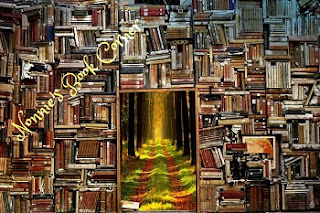 So, please, oh please, we beg, we pray,
Go throw your TV set away
And in its place you can install
A lovely bookshelf on the wall.
Then fill the shelves with lots of books.
-Roald Dahl


Omigoodness! What would I do without a book? I'd have never met Nancy Drew. I would never had known the wonder of a poem: "The moon was a ghostly galleon..."  I would believe that one woman could raise her children on by entering word contests,  I'd never had learned the phrase '"Twas brillig and the slithy toves. Did gyre and gimble in the wabe." I wouldn't know a blind cat named Homer who could catch flies out of the air and also survive 911. And I wouldn't have met Dick Francis.

Ten Facts About Books and Me:

In March I read four books:
The first two books are a continuation of a Young Adult series I'm reading.

I read Bleak House as an audio book. I often read older classics this way. Many older books were first serialized and the money earned was determined by how the number of words written. It tends to have a lot of drawn out situations, descriptions, and sideways wandering but I did find that I had no problem going through books if I listened to them. Bleak House is one of these. To support and explain the premise of why I listen and why I needed to have a list of characters, here is what Goodreads said: "[Bleak House] was published in 20 monthly installments...It is held to be one of Dickens's finest novels, containing one of the most vast, complex and engaging arrays of minor characters and sub-plots in his entire canon."
I fell in love with Mr. Jarndyce and the Little Woman. The characters were rich and side stories and characters all came together in the end. The ethics and compassion of Mr. Jarndyce plays against the ruination of lives that live on hopes that will never come to be. I think that one of the funniest things in the books was a part of Mr. Jarndyce's personality. Though he is a benevolent man, he does not like to be thanked. When someone starts to thank him, he starts talking about the east wind and how it looks like it might switch to a north wind soon...
I believe this book will go right up with the other classics I adore:  Understood Betsy and The Home-Maker by Dorothy Canfield Fisher, Wives and Daughters by Elizabeth Gaskell, and Jane Eyre by Charlotte Bronte.

I found the book, I Capture the Castle quite by serendipity. It was written in 1948 by Dodie Smith. I'm really not good at writing descriptions of books, so I hope, dear readers, that you will bear with me. The castle in the title really is a dilapidated castle that a very poor family lives in. Most of it is in a state of "rack and ruin,"and part of it is uninhabitable. The family just manages to get by. The youngest daughter, the heroine of the story, decides to write a journal and follows the events of her family for six months of an unusual amount of events and change. It is a very dear book and so worthy of being read.

In the beginning of this post, I named four things I would never have met if I didn't read books. Leave a comment telling me the books I was describing. The one who gets the most books correct will win a prize...a quilty surprise. If there is a tie or two or...there will be a prize for each!

I hope you will put your nose in a book today and find yourself in another place.

Posted by Quilting Nonnie at 1:35 PM