We've all known superheroes. In my youth it was Mighty Mouse. 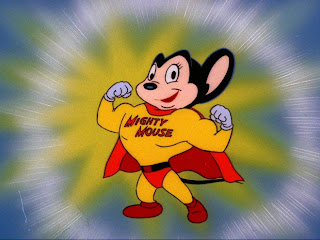 When I was heading off to college it was The Six Million Dollar Man. Who was the superhero you loved from your childhood? 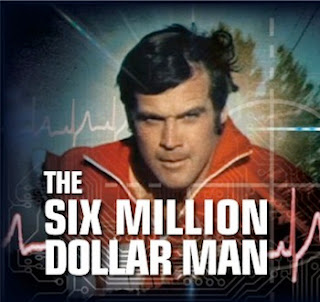 Of all the superheroes I've known, my favorite is Superhero Curly!

Each year I go East to visit my kids. When I get to Nancy Drew's house I have the most wonderful two days. Sweetie gets to stay home from daycare and I get her all to myself. This year when I arrived, Sweetie said, "On our day, can we make a cape for Curly? She loves being a superhero." This
is one reason I call her Sweetie. Later that day while we were looking at cool stuff in her room she said with wonderful intensity: "I love Curly. I would step in front of a car to protect her." Excuse me while I wipe my eyes. 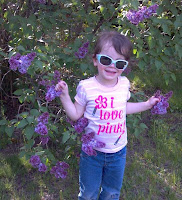 On our second day, off we trotted to Joann's to find the perfect material. Sweetie wasn't feeling well, but she was determined. Of course all the fabric was overwhelming and we went through the aisles twice. Sweetie was looking for something bright and cheery. I pulled out some fabrics here and there but they weren't "it." Finally Sweetie sat down on the floor, feeling worse. I started scanning the fabrics right in front of us. Suddenly I saw this fantastic fabric in front of me and drug it out and showed her. She looked at it and said, "I like it." Pause. "I really like it." We had found it! The cape was to be reversible, one down, one to go. Sweetie remembered that I had shown her dotted fabric that had glitter on it. Perfect!

Back at home, we laid out a "pattern" I had gotten from Craft Buds, a blog I found through Google. Instead of goofing around trying to devise my own cape and get the right design, I used her pattern. Sweetie and I laid it out, she cut it out and we pinned it. I had given Nancy Drew a 1960's Pfaff that my Aunt Marie had. I do not have good mojo with that sewing machine. Yes it was a wonder to see. I had learned to sew on my mother's same machine. With it I had started my quilting journey. Nancy Drew does not sew, but she had this cheap (in both senses of the word) to do basic mending. Hence, the Pfaff found its new home with my second daughter. It was fun taking that 50 pound machine as carry-on luggage, but that's another story! 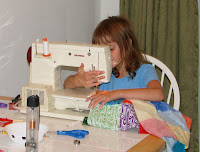 Four years ago, Sweetie and I made her first quilt. We used the Pfaff. Nancy Drew had inserted the bobbin case incorrectly. When we made the first stitch, the needle got stuck in the down position and wouldn't budge. Exasperation. Tugging. Bother. Tugging. Vexation. Calling hubby. Botheration. Breaking of bobbin case. My "swear" word: Snergen. I finally conceded victory to the pesky machine. Eventually we borrowed a machine from a friend of my daughters.

Hold on to your seats...fast forward. Pfaff all fixed and read to go. I couldn't find where the pedal plugged into the machine. Brilliant idea.  In retrospect, idiotic move. I plugged the pedal into the wall outlet. Press pedal. Pop! Smell of electricity dying. Machine gives a sigh and dies.

However, the machine did work. If you turned the wheel by hand. Which is what we did. Sweetie did the turning of the wheel and got remarkably fast with it. Not before I gave it a try. My wedding ring was hitting the metal wheel. I decided to take off my ring. Snug, no budge. Soap to the rescue! Two weeks later I still can't get the ring back on. Aggravating.

It turned out fantastico! 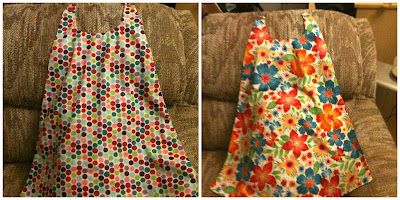 Since Curly wasn't there, the only models we had were ourselves!

This is definitely saving the best for last: Superhero Curly! 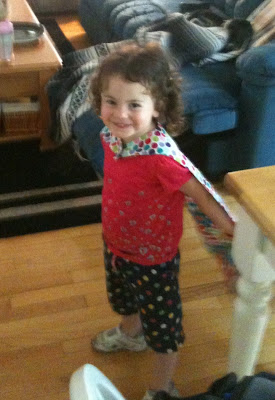 Off to save the day!

I don't know for sure, but I think Curly's smile was enough for Sweetie!

Hooking up with Really Random Thursday. Grab badge at right and see how random other people can be.

Posted by Quilting Nonnie at 9:48 AM