Lovely! Another Friday. TGS & OSLW arrived Wednesday evening--beauteous! Yesterday, I was like someone who had a nickel stuck in him...one of my mom's great descriptions. I chattered and talked and babbled all day. I definitely did the TMI ad nauseum. I was so keyed up, I couldn't shut up. Terri, I would mutter to myself, STOP talking. Terri, TMI. TERRI--SHUT UP! 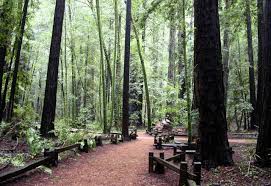 Today we're going to Armstrong Woods, a favorite of the kids and I. It's a redwood state park and so enchanting. It has sublime picnic areas, shady and serene. There's an amphitheater that the kids loved to perform in when they were little and run up and down the benches. There's two trees that are spectacular: 310 foot Parson Jones Tree and the 1400 year old Colonel Armstrong tree. The Colonel Armstrong is a fallen tree and you can see the multitudinous rings. All this gloriousness just 45 minutes away from home! Now that you've seen a few pictures I know you are drooling and wishing you could come see it for yourself!

I'm sharing my grand park news on Whoop, Whoop Friday. Click on their badge in the right column to see loads of Whoop Whoops, guaranteed to make the start of your weekend truly awesome.

I titled this post Whoop Di Doo because of an experience with my grandson, Firstest, when he was almost two years old. Here is the story from a book I wrote of Firstest Stories as a one- and two-year old.

Editorial Note: I do not know WHY the font is so big and the bold is in effect....grrrrrrrrrrrrrrrr! I've tried to change it but to no avail. I know others of you with blogger have had the same problem. Please bear with this ugliness. Maybe TGS can fix it later but, for now we're off to Armstrong Woods!


Noel Heart and I went shopping for material for the quilt I’m making him for his birthday. At one fabric store Firstest was about worn out with the whole shopping thing. I put him up on my shoulders and he started singing this song and messing with my hair. He was singing whoop di doo, whoop di doo. Noel Heart didn’t know what whoop di doo meant. Firstest was so happy messing with my hair, sticking his finger in my ear and singing. It wasn’t until he came to stay with me that I figured out what the whoop di doo was. When I picked up Bryce I'd say, "Up you go!" Translated into "Bryce-ese" whoop di doo.

Okay so you might have to be a grandmother...enchanted by everything your first grandchild says and does...but I think it's cute.

And here's a quilty reference, the first real quilt I ever made, for Firstest. I named the quilt, Chris the Fireman, after my dad. He was a fireman and captain of a fire station when I was very young. 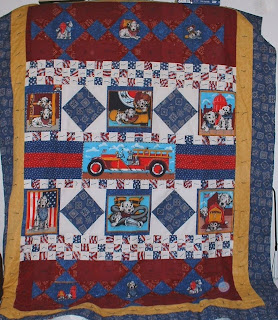 Posted by Quilting Nonnie at 10:32 AM